This time of year it seems the social wasp has taken an extreme dislike to humankind and they are poised to attack at a moments notice. A very nervous insect on a good day, lately they are like gun slingers at the OK Corral! It is because they are in a last minute fervor of mating to ensure survival of their species. Wasp society is typically matriarchal, the female is the one with the sting, it is best to stay clear since she wants no interruptions for this final party.

The days of the colony are numbered and soon many wasps will die leaving behind the mated queens who will find a place to hibernate for the winter. In the early spring the females emerge to find a suitable place to build a nest. Their bodies already contain fertilized eggs from last fall so they need only to select a place secure from the elements to begin the cycle of reproduction. Once the site is selected, surviving females gather to build a paper nest.


Some studies indicate that several species of social wasps select a the queen through a contest within the group who gather in early spring. All of the females within this species are capable of laying eggs however the one with the ability to eat the eggs of her rivals wins. Following selection of the winner all other females stop laying eggs and the losers become workers, foraging for their queen and raising her young.


In other species, the female lays the eggs and raises the first young wasps herself… the first of the eggs to hatch are always sterile female who become workers who take over for their mother. They expand the nest and maintain their siblings in a series of intricate brooding cells. It is easy to determine the number of wasps in a colony by the size of the nest. Large colonies, which can number into the thousands, have extremely large and intricate nests.


As with Ants, male wasps are relatively unimportant and rather like dead beat dads. There is little necessity for them with exception of fertilization of the eggs as they contribute nothing to the hive. Wasp males born late in the season have the express purpose of embracing the females and following this task they die.

The wasp is a fierce natural predator, eliminating many garden pests, so oftentimes useful to ignore them. However stay clear of the excited buzzing-about that is occurring now; they are happy to attack enmass in a painful, terrifying swirl.
Posted by Catherine Dougherty at 9:52 AM No comments:

The Miracle of Faith Healing... Blowing the Burn


I was re-reading the Foxfire books one spring many years ago. We had a cook out one fine Sunday and I was talking about the books to friends. I mentioned how fascinating it was to me that the old ones in the Appalachian region had used folk medicine and held their beliefs since the 1700's. Brought to America by their Scottish ancestors, because of the mountains, an intense isolation had taken hold and nothing had altered their ancient practices. I mentioned I read they used a Bible verse to stop bleeding. A guest casually said her uncle could 'blow the burn'. I asked her to elaborate and she said he could even do it over the phone, it was his gift and he did without pay. She said he tried to help severe burn victims in hospitals but often they dismissed his efforts and told him to leave. It is his belief that fire stays in the flesh unless it is blown, thus the zig-zag look to a healed burn. It's the fire still within the skin and it must be blown for the burn to heal correctly. Strange conversation, strange luck... because I would need the information within weeks.  Our sixth son Peter was 10 at the time of his burn.


If you slam our oven sometimes the air flow will blow out the burner but we're careful and you can always smell the accumulation of propane. He was happily baking cookies and I was in the kitchen with him as he checked them. I got a whiff of propane and was horrified as he grabbed a stick match and in a split second lit it! The explosion rocked the house and could be heard at the barn. Ten minutes of propane had filled the oven and blew up in Peter's face. He was blown backwards and I saw the fire as it boiled out of the oven to snatch him... it had talons and it was alive. (Photo: Minutes after the explosion.)
Michael who was coming in the back door grabbed Peter who had been blown 10 feet against the back wall and put out his hair. Peter was immediately in shock and the skin on his face began to rise up. Turning from red to white, layer after layer was coming up, his nose was black, his lips ashen, his eyebrows and lashes melted, the forehead hair was singed and much of it gone as well. It was too bad a nightmare to comprehend!

I called the hospital and they told us to route to the burn center. Peter began to shake and cry; the pain was unimaginable and horrible. Maybe 4 minutes had lapsed and the skin was still lifting and beginning to white-bubble. The black around his nostrils indicated how much smoke he had inhaled. We wrapped him in a blanket and in a single heart beat imagined the months of peeling, molded face masks, and our son never looking the same as his brothers. We decided the burn was too bad for hospitalization.

Michael told Peter to draw deep down within himself and find a place to put the pain for a few minutes until we could call the burn-blower and it would be alright. It took three agonizing minutes to get the number and make the call. The gentleman blower was not at home but his grandson said he had the gift too and he could do it even though he had never done it before. He was sixteen.

He asked how he was burned, with what properties, where the concentration was and a few other questions. Then he told me to gently blow on Peter's face, starting from left to right and slowly blow and he would do the rest. As I blew, layer after layer of skin began to flatten down, Peter stopped shaking and the pain subsided. The grandson told me that the aloe I had on hand was fine to use but not necessary. He said the burns would be totally healed in 30 days and that they would leave no scarring. The fire had been blown and was no longer within Peter's face. 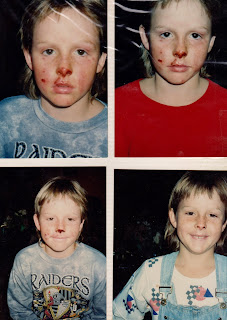 (Taken over the next three weeks...)

~The Miracle of Faith Healing... I am a grateful believer. 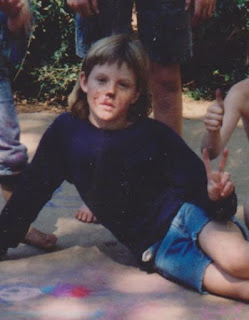 Posted by Catherine Dougherty at 8:11 AM 3 comments: 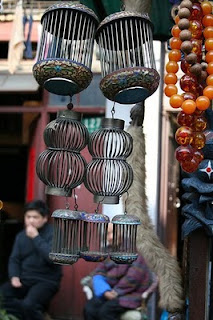 A shy and reclusive little insect, the cricket rarely makes a public evening appearance until the urgency of mating begins. Following fertilization cricket eggs are deposited in the soil in the autumn soon after the rains begin. They will rest there until time to hatch in the spring; once they are born baby crickets hide during the day. They emerge to eat in the evenings and enjoy grasses, pieces of grain, wool and their favorite snack... book bindings. Apparently the darling cricket will sing, mate, then come inside to eat a good pair of wool pants and a book or two before its life cycle ends.
Photo: An Outdoor Asian Market Selling Cricket Cages

Luckily, the Asian fabric of choice is silk which is unappetizing to crickets for had it been wool the cricket's popularity would have suffered greatly. Years ago I pulled my 'good' white wool, Katherine Hepburn style, very expensive pleated slacks from my closet only to discover one leg was totally destroyed with cricket holes. Now whenever I hear them in the house I track them and gently place them outside to play!
Posted by Catherine Dougherty at 7:25 AM No comments: