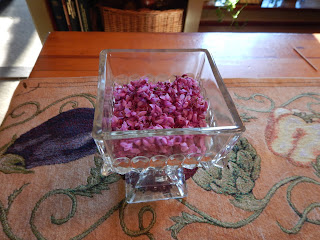 The current chill is exactly what we needed to assure beautiful blooms on the Peonies this year. They need a good dose of cold in order to produce bountiful flowers. Luckily, we lost only a few mid-blooming Jonquils that were in the boot last week.

The fabulous Redbud, our state tree, has begun to bloom and can be seen dotting the landscape everywhere. The delicate lavender and fuchsia flowers dance along the bare branches before the heart-shaped leaves emerge, thus making it one of the earliest signs of spring. The Redbud is an ancient species common in , , , and where it can grow as tall as 40 feet. A European species is called the Judas tree because of the belief that Judas Iscariot, the betrayer of Christ, hanged himself on a Redbud tree. This mistake in species caused a heated debate over making it our State tree, with resident John Y. Iskian, finally proving that although related, the two trees remained different. Concrete success came on when Gov. Ernest W. Marland and the Sixteenth Legislature signed Senate Joint Resolution Five, officially bestowing emblem status and extolling the redbud's historical role of welcome to the "sturdy and hardy pioneers." On the redbud became our official tree in a statute signed by Gov. David Hall 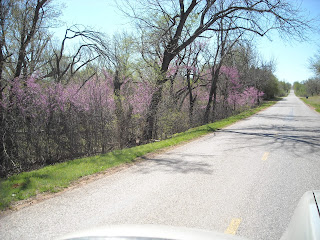 It is not a well know fact that the blooms are edible. Much like the honeysuckle, they contain one tiny drop of sweetness. The lovely color makes adding them to a salad positively knock out... a plus is the surprise so few know they may be eaten. Native Americans used boiled bark to cure maladies, including leukemia and bows were made of the wood as well.

The early tulips have begun to bloom as well. With over 3,000 varieties available at affordable prices, there are tulips for every taste. Gardeners can plan a continuous spring show by planting several varieties which bloom in successive intervals. The early pastel heirloom, the mid-blooming fragrant ruffled, and finally the late blooming sexy-scalloped parrot will provide continuous flowers for almost a month each spring.


Tulips make lively indoor arrangements and it is delightful to be able to bring cut flowers inside this early in the season. Do remember that tulip stems continue to grow several inches after they have been cut. This is the reason that many tulip displays tend to develop a droop over the edge of the vase after several days. This effect is quite attractive but choose a vase that will allow for dramatic flow.
Posted by Catherine Dougherty at 7:40 AM No comments: Links to this post

In Praise of the Potato

Many of Irish descent planted potatoes on St Patrick's day, in hopes for a blessed crop. Long considered the most perfect food, it is cultivated globally, and the potato has been credited with saving people from the brink of starvation. The failure of the potato crops in created a famine causing thousands of people to flee that tiny nation in search of food... the Irish immigrants arrived on our shores due to loss of the potato.

Oddly, the potato is native to Peru with the earliest archaeologically verified tuber remains found in the mountainous central region, dating back to 2500 BC.  Potatoes provided the principal energy source for the Inca Empire and its Spanish successor. In Bolivia and Peru in altitudes above 10,000, tubers exposed to the cold night air are made into chuño. Making chuño, which means frozen potato in Spanish, is a five day process during which the potatoes are frozen for three nights then subsequently exposed to bright sunlight each day. By the end of the process the chuno is chopped and may be stored for years with no loss of nutritional value. Chuño was discovered by the Spanish conquistadores in the 16th century and became the diet of the  native silver miners who were enslaved by the Spanish government. The potato was introduced first to Spain and cultivation traveled throughout all of Europe by yhe 1600's, reaching the American shore by 1621 when the Governor of Bermuda sent a chest of them to Jamestown, Virginia.

Astounding potato news was released last week. A new scientific study is to begin in Lima Peru next month with NASA, the US space agency, aiding Lima's International Potato Center. () CIP is a nonprofit research facility that seeks to reduce poverty and achieve food security for millions globally. They have chosen the La Joya Pampas, a sector of the in southern , for an experiment in growing potatoes in harsh conditions. The La Joya Pampas are considered perhaps the driest place on earth... nothing grows and there is no insect or animal life. It was selected because it resembles Mars.

One hundred potatoes were selected for the experiment. Of those, 40 are native to the , conditioned to grow in different ecological zones, to withstand sudden climate changes, and to reproduce in rocky, arid terrain. Sixty have been genetically modified to be immune to viruses and survive with little water and salt. The head of the experiment, Peruvian Julio -Silva is concerned as our cropland disappears due population growth, millions may starve. He is hopeful that perhaps food may be farmed on Mars to feed our ever-growing population. *Vegetable news is rarely exciting, but this certainly is!


Further information on this lovely vegetable, which is truly a gift from God:


*A potato will draw poison from a wound. Michael had an bad toothache once and the dentist put an intricate drain in the wrong place. I had him put a slice of potato on the gum line above the abscess and after about 15 minutes it popped, and (grossly) filled his mouth with the rancid goo. After swishing with hydrogen peroxide, he was good to go.

Incas had many uses for the potato:


Carried them to prevent rheumatism


Ate with other foods to prevent indigestion.


Measured time: by correlating units of time by how long it took for potatoes to cook.


Treat frostbite or sunburn by applying raw grated potato or potato juice to the affected area.


Help a toothache by carrying a potato in your pocket.


Ease a sore throat by putting a slice of baked potato in a stocking and tying it around your throat.


Ease aches and pains by rubbing the affected area with the water potatoes have been boiled in.


Place potato slices on the eyes after receiving welders flash to reduce pain and swelling.
*Photo Credit: The Smithsonian.
Posted by Catherine Dougherty at 7:03 AM No comments: Links to this post

The Art of Weeding 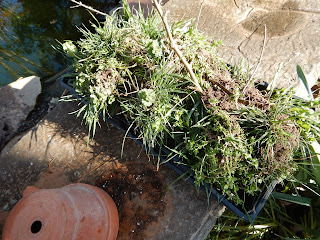 Over the weekend Spring entered the garden in all of her glory. The cool mornings and warm afternoons have provided the sort of weather which makes one rush outside to smell the newness of the season and watch as tender baby leaves unfurl in a time-lapse moment. One can smell the sweet scent of flowering shrubs wafting through the air with each soft breeze. Spring is truly a treat for all of the senses!

It is time to address the weeds, which seem to be crashing the garden party like a drunken, raucous crowd. To the novice gardener, weeding is simply the removal of unsolicited and untidy plant material which invades the garden uninvited, overpowering and bullying the true guests. All gardens must be weeded however there are many theories on how to achieve success without repeat effort. Chemicals aside, informed personal effort is the only answer.

There are the die-hard pioneers who believe that hoeing is the only answer and that hoeing is manly. (It is!) Hoeing is primarily used in the vegetable patch to remove weeds in a crowded space; the hoe can get in and about the vegetables easily without harming them.

There is an art to properly using a hoe, which must be sharpened and oiled before use each spring. The hoe, like a good knife, is a balanced tool and this balance allows the gardener to literally drop the weight of it on the intruder without much physical effort.  A gentle rhythm is used and is almost like a dance…slowly lift-drop, lift-drop. Experts at hoeing are often amused by those who use a frantic chopping-action, which is not only a waste of energy but also has employed the human back to do the job of a expertly maneuvered hoe.

For the flower garden, hand removal is the only logical answer. To truly remove weeds it is necessary to trace the stem of the weed below the ground to the base of origin, follow the outlying roots with the finger tips, then remove all of it in a slow steady pulling motion, root and all in its entirety. It is difficult to feel the root system wearing gloves so many gardeners chose to weed gloveless, which will likely produce a 'green thumb' stain.

Weeding can be an almost a Zen-like activity, calming, unrushed, and quieting. When the soil is moist and the weather not too hot, it can be a perfect way to spend an afternoon.

*Tip: Removing the unwanted finger stains is easy if one simply adds a tablespoon of sugar when washing hands with soap and water.
Posted by Catherine Dougherty at 2:43 PM No comments: Links to this post

Each of us have a choice how we live our lives. Simplicity suits me and was relatively easy for us. Since 1983 my personal ’statement’ to save our planet was to shop carefully. I have found that clothing, household items, cooking utensils, decorating items, shampoo, cosmetics, or anything else can be foraged outside of a conventional store for a fraction of the cost. So I shop yard sales when they are in season, decent thrift shops, community sales and auctions... and sometimes you are rewarded.

At yard sales I meet new people, chat, and look at gardens while I browse, often coming away with the gift of a plant or cutting. I enjoy the limited selection and the feeling I am shopping an outdoor bazaar. I also find it amusing to ‘study’ people conducting a sale by looking at their books, which are a profile of their personality… like the little old lady who was selling the 'Harrad Experiment' or the Bible thumpers who read nothing but Satanic novels. Often I am amazed. The man who sold his great-grandmother’s rocking chair for $40 was an enigma, the one who sold the canon ball that removed his great grandfather's leg in a Civil War battle for $5 was as well. A clock belonging to a deceased maiden aunt and her 1930's Cuban Crocodile purse, both for $10 were a surprise as was the signed Houdon statue for $50.

When I shop this way, I (purposefully) don’t pay taxes since taxes have already been paid on what I buy, which is a statement unto itself... and I pay about 5 cents on the dollar.
We can each make a difference in our own way… and sometimes, after many, many years...the garage sale gods may reward you as they did us with our Houdon, a once in a lifetime find.
Posted by Catherine Dougherty at 8:44 AM No comments: Links to this post