Social Wasps on the Move

This time of year it seems the social wasp has taken an extreme dislike to humankind and they are poised to attack at a moments notice. A very nervous insect on a good day, lately they are like gun slingers at the OK Corral! It is because they are in a last minute fervor of mating to ensure survival of their species. Wasp society is typically matriarchal, the female is the one with the sting, it is best to stay clear since she wants no interruptions for this final party.


The days of the colony are numbered and soon many wasps will die leaving behind the mated queens who will find a place to hibernate for the winter. In the early spring the females emerge to find a suitable place to build a nest. Their bodies already contain fertilized eggs from last fall so they need only to select a place secure from the elements to begin the cycle of reproduction. Once the site is selected, surviving females gather to build a paper nest.


Some studies indicate that several species of social wasps select a the queen through a contest within the group who gather in early spring. All of the females within this species are capable of laying eggs however the one with the ability to eat the eggs of her rivals wins. Following selection of the winner all other females stop laying eggs and the losers become workers, foraging for their queen and raising her young.


In other species, the female lays the eggs and raises the first young wasps herself…  the first of the eggs to hatch are always sterile female who become workers who take over for their mother. They expand the nest and maintain their siblings in a series of intricate brooding cells. It is easy to determine the number of wasps in a colony by the size of the nest. Large colonies, which can number into the thousands, have extremely large and intricate nests.


As with Ants, male wasps are relatively unimportant and rather like dead beat dads. There is little necessity for them with exception of fertilization of the eggs as they contribute nothing to the hive. Wasp males born late in the season have the express purpose of embracing the females and following this task they die.


The wasp is a fierce natural predator, eliminating many garden pests, so oftentimes useful to ignore them. However stay clear of the excited buzzing-about that is occurring now; they are willing to attack enmass in a terrifying swirl.
Posted by Catherine Dougherty at 9:40 AM No comments:

For the Love of Leaves 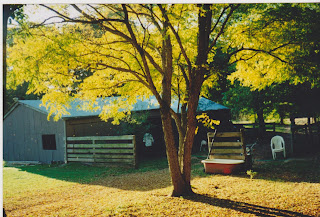 Sunday was glorious weather requiring a light jacket as the cool breezes gently blew throughout the day. It was a stark contrast to the smothering humid heat and screaming wind before the violent storm on Saturday evening. The rolling thunder, flashes of lighting and horizontal rain was remarkable in its terrifying velocity. Sunday reminded us there is calm following a storm… and Autumn arrived.


At last the trees are beginning their foliage show and it is promising to be a lovely one that we may enjoy until our first deep freeze. Although the following explanation will be a vast over simplification, it may provide insight into the foliage change. During the spring and summer the trees use their leaves to collect air and water to turn it into food. The process, called photosynthesis means ‘putting together with light’ so as the days shorten and daylight diminishes, the gathering process ends. The leaf is no longer necessary to the tree and begins its transformation providing breathtaking color for a brief moment in time.


The chemicals chlorophyll and carotenoids are present in the leaf cells throughout the growing season with chlorophyll making leaves the bright green color. As daylight decreases in autumn, chlorophyll production stops and the chlorophyll disappears. With the loss of chlorophyll the carotids, which have been there all along, become visible and display lovely yellow leaf color. Lastly the anthocyanins arrive and take center stage, ushering in the vibrant reds we associate with Autumn.


Anthocyanins, which are glucose (sugar), are singularly responsible for the brilliant hues of purple, crimson, and scarlet. They are a fickle lot, insisting on warm sunny days and crisp evenings to slow the closing of the leaf veins and trap excess sugar produced at this time… if the weather does not comply to their demand, lackluster reds are produced. Following this last exercise, the trees will toss their leaves so they may begin their final challenge.


Since shade and the foliage show are not all the leaves have to offer, their parting gift is perhaps the most important. As the leaves drift from the trees and collect below they continue to work by slowly decomposing. Over time this process adds nutrients to create a dark rich soil which nourishes the baby saplings as they grow to become forest giants like their parents. New research has proven that trees will provide a network of mutual care through intertwining roots and the adults will actually send nutrients to ill or immature trees to assure they live and thrive.  The miracle of nature is always at work regardless of the season.

Posted by Catherine Dougherty at 9:40 AM No comments: 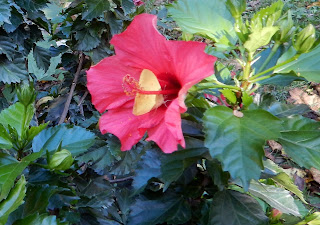 According to season twice a year an amazing number of species on the planet tend to migrate. As defined by the dictionary ‘migration is the seasonal movement of a complete population of insects, fish, and birds from one area to another as a response to changes in temperature or daylight’.  Our birds and butterflies are in the process of migrating South at this time and the sight of them is awe inspiring as great numbers gather.


The Butterflies: The butterflies have been arriving in my garden for several weeks as they continue their journey south to Texas or Mexico. It took three days for hundreds of Monarchs to travel overhead with many flying from far Northern states. Often in a group of six to ten, sometimes alone, they stopped for a sip from my flowers and rested a bit before continuing their journey. I finally got a chaise lounge to look upward rather than have my neck hurt from looking to the sky for hours.


An oddity this year is the spectacular gathering of literally hundreds of bright yellow butterflies dancing about the garden. There is great symbolism associated with yellow butterflies with some Native American tribes believing they bring guidance, hope, joy and creativity with their sunny presence reminding one to have fun. A yellow butterfly flying about you is said to bring happiness and prosperity, while one hitting your face in the fall means the leaves will turn yellow and a frost will come within 10 days… one gently hit my face on Sunday so we shall see.
Of course the Irish had a myth concerning the yellow butterflies believing they are indicators of departed souls who are resting at peace in the after-life. This belief was adopted by the Scots as well and the sight of them near gravesites promised the souls of children and mothers who died during childbirth were safely in Heaven.

In some costal cultures it was believed if a yellow butterfly landed on you in the fall, grave danger of illness was looming so extra precautions should be taken to protect oneself. *Naturally the formula for protection has been lost over time. It was believed if one landed on a departing sailor he would not survive the voyage.


The Birds: This week will mark the end of the Hawks and Vultures migration, so look in open fields and possibly catch them as they ‘kettle’. They will gather as though they had been telepathically summoned, their numbers reaching hundreds as they gather and wait for some internal signal. The signal is a warm thermal updraft which will aid them in their travels and with its arrival they will begin to kettle.

Kettling is the manner by which the birds take flight and begin graceful acrobatic wheeling and swirling in a circular motion. They will twirl higher and higher as more birds join the wondrous dance, continuing ever-upward until the first birds appear only as small dark specks in the blue sky. And then they will disappear and be gone, returning in the early spring.
Posted by Catherine Dougherty at 10:32 AM No comments: