Tomatoes in the News... Finally

Tomatoes in the News… Finally

At last the flavor of tomatoes has reached the forefront of national news… on Monday a story appeared on television which addressed the flavor of current tomatoes. As all of who love them may attest tomato flavor has become more and more lackluster as years progress until they taste... well, blah. The news suggested that two flavorful tomatoes may be genetically combined to create one with true flavor.
Originating in South America, tomatoes were prized by the Aztecs as early as 700 AD. They were brought to Europe from the Americas by Conquistadors in the early 1600’s but were considered poison by the wealthy. Unfortunately, the flatware and plates of that time were made of lead based pewter and the acidic tomato caused the lead to leach from their dinnerware to the fruit. When it was eaten, the victims died of lead poisoning… a very unpleasant way to go. Peasants had no such finery in their kitchens and ate from wooden plates with wooden spoons. Thus the tomato was relegated as a food of the lower classes where it was widely accepted as a staple. Not until the 1800’s did the upper classes begin to embrace the tomato. By the time of the Civil War, the tomato was at last accepted throughout the south as a garden and dietary staple.
As I noted in 2013, ‘for almost a decade now tomato harvests have been lackluster to say the least. I can remember when a tomato plant tossed anywhere in the garden would flourish, producing an over abundance of fruit all summer. There were no requirements or procedures to ‘baby’ fussy plants… they were tough and hardy. Planted in several three week successions, one could expect tomatoes from June until October and first frost.’
Originally it was reported that tomato plants like daytime temperatures between 70 and 85 degrees. In hybridizing the tomato for growers in cooler climates, they have genetically altered the original requirements of the plant... previously tomatoes liked it hot and dry. In altering their genetic makeup, the flavor has not only changed it has been eliminated. It is obvious tomatoes simply were not suited to be grown in New England!
Americans eat over 12 million tons of tomatoes each year, making it one of the most popular items on our menu. Throughout the United States, tomato harvests have been declining and perhaps this too is because of the hybrids. The hybrid tomatoes came with a list of illnesses the tomato plant may have and they seem a bit ridiculous. Included are leaf roll, blossom end rot, sunscald cracks, and cat face and others. Various sites call for a laundry list of exhaustive remedies… all for a plant that was at one time so hardy it originated in Mexico!
In years past if the plants were not producing gardeners went outside and ‘spanked’ the plants with a broom and one of our best yields came the year the cows got into the garden and stomped the plants. Being basically masochistic, they straightened right up and produced a record crop!  here is nothing more tasteful to the palate than a fresh tomato… I look forward to them again.
*The blueberries and Strawberries were mentioned as well
*Photo: A typical daily harvest from 20 plants in 1998.
Posted by Catherine Dougherty at 10:09 AM No comments:

Mother of Thousands... Her Baby Succulents 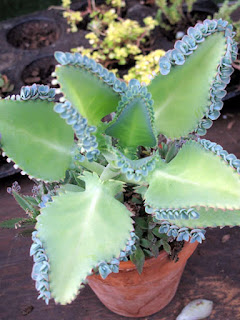 *Please note: All parts of this lovely plant are poisonous and may prove fatal to children or pets... keep away from them.
Once again the weather took center focus with frozen rain and ice accumulations, temperatures below freezing and fog. Additionally, the rain on Sunday was an added surprise and the since temperatures did not reach above freezing ice continued to form on the trees and shrubs.  Fortunately we had no wind for it was cause of the devastation of the ice-laden trees several years ago…as the wind howled one could hear hideous sounds of giant trees snapping and falling with a deadly thud. It took literally months to clean the mountains of debris that covered all of western Oklahoma from El Reno to the border.


The Succulents are enjoyed by all gardeners for their easy going nature and their ability to survive during stressful summer days, enduring where other plants may perish. The secret to their survival is their plump fleshy leaves which store water for the plant to use during extremely dry spells. However this water content is the reason they may not reside outdoors during the winter for the leaf becomes an ice tray… frozen leaves will immediately end her life. However if taken indoors in early Autumn, watered slightly once a week when the sandy top soil is dry, she will thrive until time to take her outside in the Spring.


One of the most adorable is Mother of Thousands whose easy propagation is the reason for her name. Originating in Madagascar, this succulent has lost the ability to produce seeds and only reproduces from plantlets,  which are small baby plants growing along the leaves of the fading adult plant. As the Mother plant begins to end her life cycle, these adorable babies appear in winter along the sides of her leaves. As the babies mature, tiny sprigs of root begin to appear, growing until it is time for the youngster to literally slide down the parent leaf into the soil below to begin life alone.


She detests soggy conditions, as do all sedums, so plant the youngsters using a terra cotta pot with drainage holes and a sandy medium, such as cactus potting mix, for fast drainage.  Shove the plantlet into a hole the size of an index finger, tamp the soil, lightly water, and a new plant will emerge and thrive.


*For those of us who feel guilt for allowing any seeding to perish without notice, Mother of Thousands will provide a challenge… for how does one find suitable homes for thousands of children?
Posted by Catherine Dougherty at 8:48 AM 3 comments: 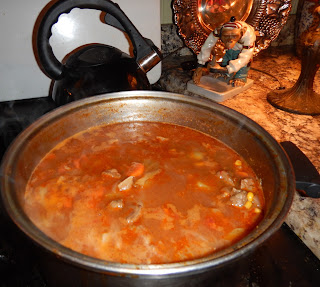 
Buy 2 ½ or 3 pounds of either stew meat or chuck… whatever is cheaper.  Cut into small bite sized pieces.. . this is important because large pieces do not get tender. Put in a skillet and cook over medium heat, adding salt and pepper and 2 cups of coffee to it as it becomes brown. Set aside when it is done.


In your stock pot add:


Cover with water and begin to slowly boil. When the cabbage is limp and the carrots and potatoes are boiling, but still firm, add the meat.


On the meat add:


1 medium jar of Picante sauce… I use mild


1 can of peeled, diced tomatoes you have squeezed and broken into pieces.


Parsley, other spices you like and anything left in the frig you want to add.

Stir and allow to come to a slow boil. Cook stirring whenever you think about it for about 40 minutes…


Serve with a roll and a glass of wine.


The flavors meld over the next few days, so add something like more potatoes each day. Boil them first and add when they are still slightly firm… also add some of the ‘potato water’ to your stew if you want a more liquid consistency. Enjoy!!!
Posted by Catherine Dougherty at 8:43 AM 2 comments: