Perpetual Seeds... a Miracle of Nature 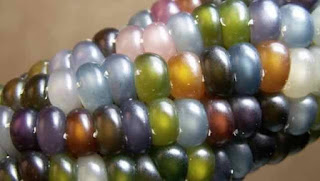 The miracle of seeds is often inspiring… their tenacity is amazing and miraculous. On an archaeological excavation students from Canada discovered a stash of seeds buried within a Native American seed pot… traditionally a small rounded pot with an opening too small to allow rodents to enter and disturb the precious seeds. Discovered on the Menemonee Reservation in Wisconsin, the pot, and thus the seeds, were carbon dated from around 1290, making the seeds an incredible 800 plus years old. Excitement was palatable as the seeds were planted and the wait began. To their utter joy, the strange seeds grew into a rare species of squash that had been extinct for hundreds of years. The students named the squash ‘gete-okosomin, which is native for ‘really cool old squash.’

There is also an amazing report of lupine (Lupinus articicus) seeds over 10,000 years old sprouting as well. Discovered in the Yukon of Alaska they were found deep within the burrows of ancient lemmings buried in permafrost silt dating to the Pleistocene epoch.

Oklahoma Cherokee farmer, Carl Barnes, wanted to reconnect with his ancestral past and began the search for corn he had only heard about. His efforts resulted in Glass Gem corn, an heirloom species that produces kernels in a stunning array of rainbow colors. By exchanging seeds from lost-then-found caches across the country, he was successful and happily and quietly grew his corn until 1994 when his success went viral as the pictured photo appeared. His seeds are now available for the public to plant.

Noting the importance of seeds, the Svalbard Global Seed Vault, or the Doomsday Seed Vault, was created in 2008. Located on the remote island of Svalbard in Norway and dug into the frozen Arctic ice, is humanity’s assurance of food perpetuation in case of a catastrophic event, such as nuclear war or an asteroid strike. It acts as a repository for some 865,000 varieties of seeds from around the globe, with an intended capacity of 2.25 billion seeds. Seeds are the recognized life-blood of the planet and their promise of survival is one of Mother Nature’s grandest plans … seeds are perpetual.

Posted by Catherine Dougherty at 7:09 AM No comments: Links to this post 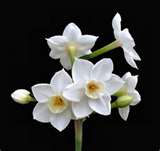 The November days seem to be passing quickly and soon the winter festivities will arrive. To decorate with scent, color, and charm, plan now to ‘force’ some bulbs for the up-coming season. For those unfamiliar with the process, ‘forcing’ is the method by which a bulb is planted and compelled to grow and bloom out of season by exposure to the warm temperature indoors. This process brings the bulbs into bloom long before they would naturally bloom outdoors, thus allowing us the pleasure of their company during winter months.

Since their ancestors came from warm areas of the Mediterranean the darling Paperwhite Narcissus requires no cold to bloom and may easily forced. Taking only three to four weeks to flower, they will bloom faithfully providing both fragrance and cheer for the holidays. So easy is the growth of these bulbs that anchoring material may include gravel, pebbles, colored glass stones, or moss as acceptable mediums. Any sort of shallow growth container whether pottery, glass, or clay will work as well. 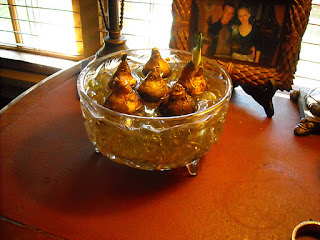 First select large, top-grade, flawless bulbs which are free of sooty mold then choose a favorite container that will be lovely as a centerpiece or focal point. Perhaps select a glass bowl for the added pleasure of watching the roots as they begin to grow and slowly twine about the stones. Grandmother’s shallow crystal bowl filled with red, white, and green glass stones is lovely at Christmas but more a more rustic selection might include a pottery bowl with polished rocks or pea gravel. Naturally if a large container is chosen, more bulbs will be needed, however the display will be entirely riotous… and often more is better!

Fill the bottom of the container with whatever you have chosen to anchor your bulbs, making a bed about two inches deep. Gently press the bulbs halfway down the bulb mass, wriggling and carefully nestling them until they stand firmly on their own. Try to space the bulbs about two inches apart, remembering to place several in the center as well. After arranging your bulbs, fill the container with enough water to cover your anchoring material, moistening the bulbs approximately half way up. Keep this water level, adding a little each day if necessary and your bulbs will begin to flower in three to four weeks. 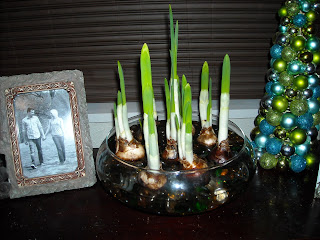 As the roots grow, the reed-like foliage will first appear and suddenly many tiny blooms arrive, slowly swelling, then opening over the course of several days. Remember to give the bowl a shot of gin as the first flower buds appear. The gin will force the foliage to stand at attention and will prevent the wilt so prevalent with forced Narcissus. 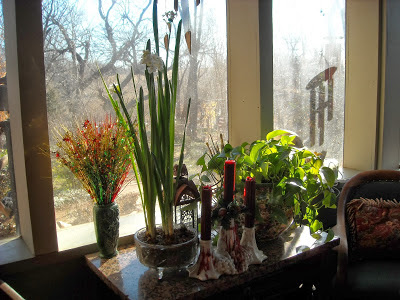 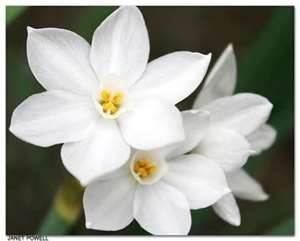 One of the most beautiful books I own is 'Paradise Contained'. Featuring photographs by William Stites, with Mary Sears and Kathryn George, it is timeless and would make a lovely gift for anyone who gardens. Here is a link to it: http://www.biblio.com/paradise-contained-by-stites-william/work/967748


Posted by Catherine Dougherty at 8:32 AM No comments: Links to this post 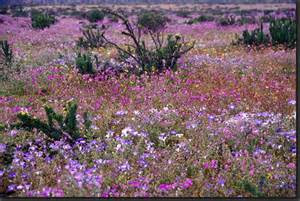 I had planned to do my column on how to wash, dry, then store Caladium bulbs, however something strange and delightful occurred this past week which is worthy of note. The Atacama Desert in Chile, known as the driest place on Earth, is awash with color after a an entire year’s worth of rainfall fell in a strange October storm which broke all records.

Arica, Chile, in northern Atacama, holds the world record for the longest dry streak, having gone 173 months without a drop of rain in the early 20th century. In another Atacama neighbor to the south of Arica, the average annual rainfall in the city of Antofagasta is just 0.07 inches.
Strong El Niño years can be a rainy boon for the region and heavy thunderstorms brought almost an inch of rain in one day… this amount is what normally falls in 14 years. The malva (or mallow) flowers on the floor of the Atacama desert awoke and are providing the most breathtaking show in almost 20 years.

Most desert wildflowers are annuals who are very short-lived, rushing to live an entire lifetime in a few short weeks before the dry heat returns once again. The seeds produced by these wise flowers will rest dormant, often for years, patiently waiting for rainfall. When the rain finally arrives, they will quickly spring forth in a glorious wash of fleeting color before succumbing to the return of the heat. 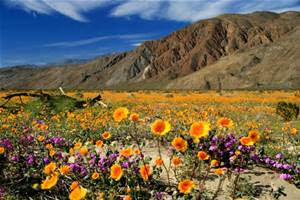 Joining the list of the driest places on earth is our own Death Valley (Greenland Ranch, California), who also claims the distinction of being the hottest as well. Death Valley saw the mercury soar to a scorching 134 degrees on July 10, 1913, beating out Libya for this dubious honor. Death Valley is also famous for its spectacular, spring wildflower displays, but those are the exception, not the rule. Only under perfect conditions does the desert fill with a sea of gold, purple, pink or white flowers.

A series of unusual storms arrived in October at Death Valley National Park. Although flooding caused damage to structures, the wild flowers awoke to produce a glorious show last week. Blooming enmasse these wildflowers attracted large numbers of butterflies, moths, bees and hummingbirds that would not otherwise visit Death Valley… it became a very busy place for a brief span of time.

The natural survival of plants are a miracle of Nature. Not only do seeds sleep if necessary, but they can adapt to man made environmental disasters inflicted upon them. In a mere six generations a weed will genetically adapt and become resistant to an herbicide… Roundup will not affect them.  Perhaps, if we are indeed fortunate, flowers will continue to reside everywhere on Earth.
Posted by Catherine Dougherty at 9:09 AM No comments: Links to this post