With the blessed rains that arrived last week, the garden seems to have recovered from the late freezes making this quite possibly the most welcomed spring in memory. Unfortunately many Iris and Peonies were casualties so they have cancelled their show this year. The flowering Quince, Spirea, and Viburnum who were all in bloom also fell to the conquering freeze so those of us who had waited for them impatiently will simply have to wipe away tears and pick up our trowels to plant annuals. Since the soil has finally warmed plant Marigolds, Nasturtiums, and Zinnias, who are all fast growing friends who will cheer us immensely.

The recent thunderstorms have washed the countryside clean and at last the dust has disappeared. And an unusual oddity has occurred this year… the leaves on everything from the trees to the flowers are incredibly large and dense with many doubling in size. In seeking an answer to this puzzle the difference this year seems to be the amount of lightning the storms produced.

The air we breathe is composed of 78% nitrogen and approximately 20% oxygen. Nitrogen is an essential element plants need to produce chlorophyll (the green) which in turn aids in the process of photosynthesis. Without becoming too scientific, photosynthesis, which means “putting together with light”, is the process of taking water from the ground through roots and carbon dioxide from the air and mixing them together with the addition of sunlight to create glucose, which is food for foliage development and overall growth. Nitrogen, the main ingredient in fertilizers, is not in a usable form for most plants unless it is altered by lightning.

The intense heat and electric charges produced by lightning cause the nitrogen molecules in the air to cling to the oxygen molecules and from this marriage comes nitrogen oxides. The nitrogen oxides will be collected by the rain drops or fall independently bringing a form of nitrogen that can now be used by the plants. With the lightning the plants have received a supercharged dose of available nitrogen, causing them to become brighter, healthier, and greener.
There is a trend in gardening circles that includes a whimsical and nostalgic recycling of old farm items…. the more worn and rusted the better. It is officially ‘shabby chic’ for the garden and everything from wash tubs, discarded wheelbarrows, metal milk containers, minnow buckets, watering cans and weathered lawn chairs are set about the garden to display a dazzling array of sparkling plants.

A visual composition of plants usually contains an uneven number of items… from three to five. The contrast of the old married to the new is a striking celebration of sorts and by planting in items our grandparents owned long ago, we are connecting to our heritage in a special way. Many city dwellers must go to shops and purchase such items however those with a rural background need only go to an old barn and dig around to find such a treasure.

Posted by Catherine Dougherty at 8:44 AM No comments: 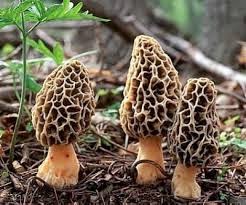 The cool rains that began early Saturday morning have greened up the countryside and extended Morel Season! Celebrated among rural folks from Oklahoma to Minnesota, the magical, mystical, and utterly delicious morel is more than simply a mushroom; it has a cult following. Why? Perhaps because the season is so short lasting only a few weeks with the first onset of spring; perhaps because conditions of temperature and moisture must be met; perhaps because the palate remembers this delicacy long after the season is over; or perhaps because they have never been successfully produced on a commercial level. Regardless of the reason, the arrival of this edible gem is the cause of many culinary celebrations all across the country. Only the subtle French truffle is more eagerly sought than the morels growing in our own back woods.

The elusive morel is usually found in specific locations, many of which are jealously guarded by experienced hunters and often these locations are passed down from one generation to the next. Morels, originating from spores, are found in clusters among fallen leaves under dying Elms, in abandoned apple orchards, under Sycamore or Ash and near decaying stumps. The morel requires a host, preferably a dead or dying tree, in order to produce.

Morels are a genus of the edible cup fungi and the highly porous ascocarps are the prize. It is said that collecting morels in a porous bag helps spread the spores, but this has never been scientifically proven. Morels are a delicacy that commands a hefty price of $20 a pound if found for sale, which is rare as most morel aficionados prefer to eat their finds rather than sell them. Dried morels are available, however much of the flavor and texture is lost in the process.

After a successful hunt, the mushrooms should be soaked in salted water overnight, if one can wait that long. The soaking kills the tiny micro bugs and critters that live on the mushroom. The traditional method of cooking includes patting them dry then rolling them in a mixture of (optional) beaten egg, flour or cornmeal or a combination of both and frying them in butter. Since margarine is one molecule away from plastic, it does not allow for as robust flavor a ‘real’ butter.

There is no better way to enjoy the arrival of spring than a walk through the woods on a fine day. Add the pleasure of searching for morels, an adult version of an Easter egg hunt, and you have a perfect day followed by a perfect meal. Happy Hunting.
Posted by Catherine Dougherty at 8:51 AM No comments: 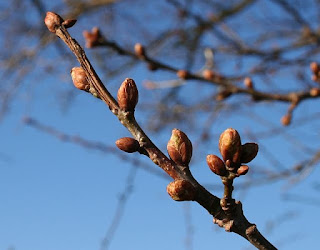 The Oklahoma weather has been bi-polar at best providing the gamut of conditions from summer-like highs to deep winter lows. Last weekend, we had an arctic plunge with rain turning to sleet and snow over much of the state. The early blooming flowers were sorely damaged and many of the Iris which were earnestly planning a fabulous show were completely frozen. The tulips drooped their heads and much of the early foliage has the tell tale transparency that indicates it was frost bitten.

The flocks of geese that were seen flying North last week were absent over the weekend… they knew of the wintry weather so they settled on local lakes and ponds to wait a bit. The rule of thumb in Oklahoma is that we usually have our last freeze on or about April 15th and folklore suggests freezes are over when the leaves on the Oak are the size of a squirrel’s ear. Another freeze is expected on Saturday morning so gardeners will have to set their trembling trowels aside for another week and resist planting the tender begonias and geraniums.

Regardless of the sporadic weather, the song birds have increased their activities with the arrival of mating season and since the trees have not yet leafed, we are allowed a brief moment in time to watch feathered courtship rituals. Their songs have a new sweetness and they are darting about seriously flirting and ‘dating‘. The Titmouse, Chickadees, and Goldfinches are earnest, the lady Cardinals all look like teenagers, and the Woodpecker has begun rat-a-tat drilling to provide a home for babies. Once the trees have fully leafed, the sight and sound of our feathered friends will be minimized but right now they provide delightful entertainment in the garden.

It must be noted that early buds are swelling on the Maples and Elms and with them comes considerable pollen and without rain it is floating about. Without going into intricate scientific explanations, it may be simply stated that the pollen of most trees, shrubs, and grasses is lighter than the pollen of flowers. It is carried by the wind as high as three miles up and as far as 100 miles from the original plant. Easily inhaled, it is the culprit of the condition called hay fever (or allergies) as it may irritate an individual’s throat and nose. With our typical breeze often increasing to driving winds, it is impossible to avoid this early pollen. As way of compensation, the pollen on flowers that arrive later in the season is generally much heavier… meaning it does not tend to blow about with such a vengeance. Thus as the season progresses, allergies will ease a bit. However annoying it may be now, it is necessary for the plant reproduction so we must be accommodating… while sneezing our way through spring.

Photo: Oak buds swelling.
Posted by Catherine Dougherty at 7:09 AM No comments: 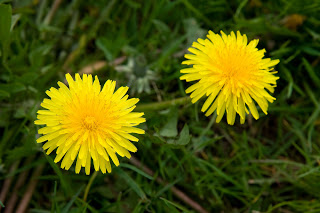 Easter weekend provided us with the blessing of a perfect sunny Saturday before the chill arrived for Easter Sunday. Many of us received a smattering of frost while others got a light freeze.  The early blooming bulbs have built-in antifreeze, so the Jonquils and tulips are all fine. However gardeners who purchased summer annuals at nurseries may notice a tell tale transparent look to the foliage signaling it has been frost bitten and probably will not survive. In my opinion, it is best to grow annuals from seed since the seeds seem to instinctively know when conditions are best to emerge.

A true sign that spring has arrived are the bright yellow dandelions that began blooming in full force several weeks ago. We can thank the colonist for bringing the dandelion to the New World. Its name is a French derivative which means ‘lion’s tooth‘, referring to the leaves which have saw-like ‘teeth’. The golden yellow head is a cluster of tiny flowers which appear as one. Its roots have hair like tendrils, each of which is capable of producing a plant and the seeds are fertile without pollination. The dandelion was purposefully imported to the Midwest to encourage survival of honeybees and it is among the most widely recognized plants, growing worldwide.

The Dandelion has many admirable attributes if one can get beyond the compulsion of having a perfect lawn. In fact the medicinal properties make it a natural garden darling.


Early dandelion greens which appear before most other edibles are a plethora of nutritional benefits. Leaves may be added to salads and have a crisp flavor which resembles chicory or endive and have the ability to ‘cleanse the blood‘. They contain more beta carotene than carrots and are richer in iron and calcium than fresh spinach.

They may be sautéed with other greens and onions as a side dish. Used in Europe, China and among Native American tribes, tea made from the leaves or roots is a gentle diuretic and system restorative. Stomach, liver and digestive problems have all been greatly alleviated by drinking dandelion tea, which does not tend to have the side effects of pharmaceutical medications. A tea taken now will cleanse the body of toxins which have built up over the housebound winter and allow an energetic ‘fresh start’ for spring activities.

The cheerful little flowers are sensitive to light so they open with the morning sun and close at dusk. The sweet delicate seed head is a wonder unto itself and has its own urban legend. It is said if one makes a wish and all of the magical seeds are dispersed with one breath, the wish will be granted.

*My children grumbled but drank the tea each spring. 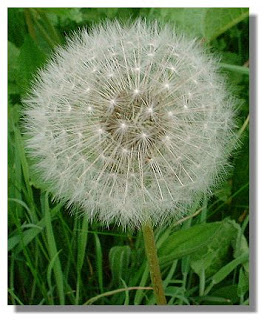 Posted by Catherine Dougherty at 7:43 AM No comments: