The year of the Pear (Preserve recipe as well) 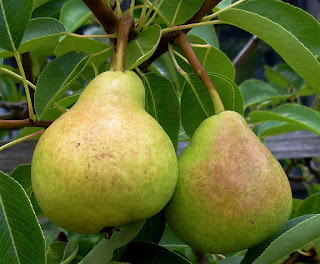 Fall is fantastic for many reasons, one being the ripening of fruit. Among the favorites are pears… one of the oldest fruits in cultivation and second in popularity only to the apple. A hardy Pear tree may live up to 100 years and this seems to be one very special year… they are literally bough-breaking with sumptuous fruit.

Charlemagne (742–814) the ruler of the Franks is credited with establishing the first collection of pears in France however dried slices have been unearthed in Swiss cave dwellings of the Ice Age, making it prehistoric in Europe. In Asia, the culture of the pear goes back 2500–3000 years where it is chronicled in Chinese writings as a delicacy for the wealthy.

In Greece, Homer’s 9th century Odyssey mentions the pear as “the splendid gift of the gods” and Roman conquerors carried pear seeds on their quests. The Britons, who managed to make an alcoholic beverage of anything that fermented, developed a drink from them called Perry… and since they winter well, pears were used as feed for livestock. Taken to the Americas for this purpose, they traveled with Lewis and Clark to the Pacific Northwest where they still flourish. The state of Oregon named the pear as its Official State Fruit and the USDA recognizes it by declaring the month of December as National Pear Month.

During Japanese Edo period (1603–1867) pears were considered a talisman and were commonly found on the corners of properties to ward off misfortune. It was believed the Northeastern corner was the ‘Devil’s quarter’ where a demon could enter and thus were a gate necessary there, two pear trees were planted on either side of it as protection. In Korea, the pear flower is found on the crest of the ancient Lee dynasty.

After harvesting slightly unripe fruit, handle them carefully since they tend to bruise easily. For immediate use, place them in a paper sack to hasten ripening as the paper will control the natural humidity produced by the fruit. The odd pear/paper relationship is the reason those pears wrapped, placed in boxes, and mailed at Christmas time arrive perfectly ripened. With this in mind, wrap pears in newspaper and place them in a cool root cellar where ripening will be arrested until they are brought to the house and warmed.

The versatile and delicate flavor of pears enhance every dish from appetizers, to entrees, and desserts… they are also delicious as a snack. A bumper crop such as this may not appear again for many years, so enjoy some today!

My Grandmother made Pear preserves, using the lemon peel, not the entire lemon. 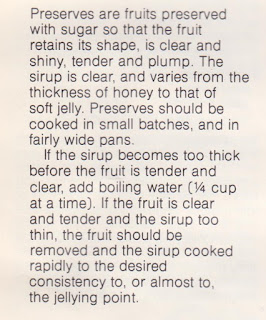 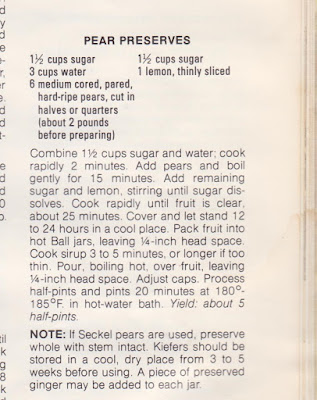 Posted by Catherine Dougherty at 9:40 AM No comments: 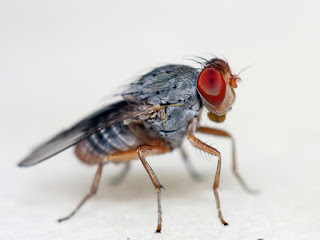 It becomes abundantly clear that Fall has arrived when quite suddenly the kitchen is loaded with tiny fruit flies. Appearing as out of thin air with the fall harvest they hover about any piece of fruit in a small swarm... jiggling a ripe tomato will cause fruit fly panic. Thankfully they do not bite.

They reproduce in a mere 8 days which is the reason that Gregor Johann Mendel used them in his scientific studies on biological features passed on through inheritance. Mendel noted that varying degrees of red in the eyes of fruit flies were directly passed to offspring and although his findings were largely over looked in 1885, further studies were conducted and by 1915 became the core of classical genetics. The modern studies of DNA began with the humble fruit fly.

Fruit flies are so small they may fly through a screen and they are beyond detection on fruits and vegetables picked outside or purchased at markets. They eat yeast produced by fermentation, the process that converts sugar to acids or alcohol... it appears as older fruit is beginning to spoil. The flies reproduce on the skin of these fermenting fruits or vegetables and suddenly you have a tiny swarm of adult fruit flies... which can become annoying, especially if you accidentally drink some with your apple juice.

Fruit flies and wine and beer makers have had a mutually beneficial relationship for millions of years. Since yeast is living, yet immobile, fruit flies have the ability land on yeast then transport microbes on their feet that activate it as they land on a batch which is forming. Although machines have been used for this task for years, bioengineer Kevin Verstrepen and his team support a new trend in beer making called ’wild fermentation’. With its fabulous sense of smell, the fruit fly is drawn to the best and sweetest yeast, disregarding bland and non-fruity yeast. Verstrepen believes, ‘It is the first smell-based collaboration’ observed in nature, which is a rarity indeed. The selections of the fly are considered far superior to those selected by mankind and so once again the lowly fruit fly has made a valuable contribution to science.

However if one is not making beer and wish to eliminate them from the kitchen, toss all over ripened fruit and set a bowl of vinegar as a trap for them.... a small jar with vinegar and a plastic wrap 'lid' with several slits in it will work. They get in but can't get out. The season for them is short and they will disappear as quickly as they appeared with the first freeze.
*Tip: If leaving the room, put a coaster over your juice!
Posted by Catherine Dougherty at 9:54 AM No comments: 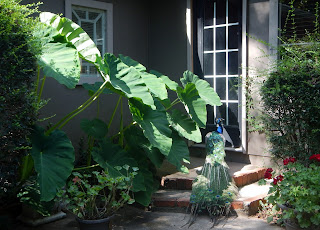 By the time you receive the paper we will be experiencing a marvelous cool wave. It is reported that the temperatures will reach the mid-seventies as a high on Wednesday… a singular delight and a true sign Fall is in the air.

This year the Elephant Ears appear to be the most robust many Summers and are providing a marvelous show. The amazing Elephant Ear (of the Colocasia family) has been in cultivation for over 28,000 years and because of this the exact origin of the plant has been lost. It has long been a major food crop in the warm climates of India, China, Southeast Asia, Indonesia, Polynesia, Africa, and South America. All parts of the plant are edible if they are thoroughly steamed or boiled to remove toxic calcium oxalate crystals. Anyone who has attended a traditional Hawaiian luau has eaten the cooked leaves and the corms are mashed into the popular poi.

Our bulbs were purchased at a popular nursery and planted once the soil had reached about 70 degrees. Planted the brick trough against the house facing North, they receive three hours of midday sun but are shaded by the entry for the rest of the day. Watering is paramount for growth so remember to water before wilt occurs, possibly three times a week.

The bulbs slept quietly for a bit then began to emerge with vigor with the first tender leaves followed by new ones each day. They seem to grow in breadth and height overnight, with many leaves over three feet in diameter … and still growing.

Rajah, the Peacock, enjoys their shade as he admires the handsome fellow he sees mirrored in the glass door… not the sharpest tool in the shed, he has no idea it is his own reflection.

It is wise to save the bulbs as they have adapted to your soil and will grow in size each year, eventually reaching the size of a basketball. Dig them following the first light frost that nips the leaves leaving about six inches at the top of each bulb, removing all the small tendrils which have grown over the season. After dusting off the soil, place them in dry peat moss in a closet or under a bed for about a month. Once they are completely dry, place them in a cool spot not subject to a freeze so they will remain dormant over the winter. Plant them again in the Spring for they provide a wonderful reason to rush to the garden each morning in August!

Posted by Catherine Dougherty at 10:03 AM No comments: