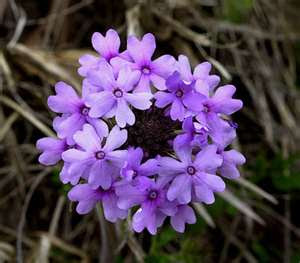 The spring-like weather of last week called to the bulbs and they seem to be waking from winter slumber. As a favor to them pick a pretty day and water since we have not had rain in several weeks Their early foliage does have a natural anti-freeze so it will survive the inevitable temperature plunge that surely will arrive by February.

Following our drought, plants that survived are a welcome addition to the garden and the exceptionally tolerant Verbena is one of them. Besides needing a bed to itself as it tends to wander, Verbena will entice, blooming profusely all season while attracting butterflies. The woody stalks and somewhat hairy leaves are unmistakable while the small clusters of flowers appear in lively abundance.

An ancient and very special family of plants, Verbena (Vervain) was mentioned in Egypt as the ‘tears of Isis’ who was worshipped as the perfect Mother, the perfect listener who answered prayers. In Greece Verbena was dedicated to Eos, the goddess of the dawn and in Rome Pliny the Elder wrote it was placed on the altars of Jupiter. In Christian folklore, it is said to have been used to staunch Jesus wounds following his removal from the cross and thus is called ‘holy herb‘. In the Japanese culture it symbolizes co-operation and its fame extends to a short story written by William Faulkner. In his story, ‘The odor of Verbena‘ he writes it ’has the only scent that can be smelled above that of horses and courage’.

As with all herbs considered magical, dark tales arose and thus in Wales Verbena was called ‘devil’s bane’. It was included on a sampler of dangerous ‘New World' plants in 1620, the height of the American witch hunt. In a book from 1721, it was written ‘Vervain and Dill / Hinder witches from their will’ and an 1870 book on magic includes instructions on how to make a Verbena charm to ward off evil. In the wildly popular Vampire Diary series by L.J. Smith, she embraced the supernatural side of Verbena by taking the historical beliefs and embellishing them. In her books humans are instructed to use it for protection against vampires and other forms of bewitchment.

The flowers are tightly packed little charmers themselves with a distinct spicy aroma and brushing by the plant will release the scent of the leaves. All Verbena may be made into teas and soaps and research continues today to discover new medicinal uses for this magical plant. Verbena is a suitably hardy plant with a long life expectancy; it will bloom in any sunny location in type of soil and requires very little attention.

Beautiful Colors To Choose From... 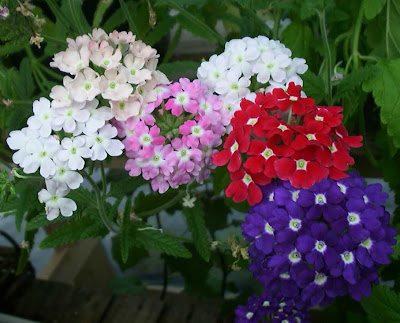 Posted by Catherine Dougherty at 11:57 AM