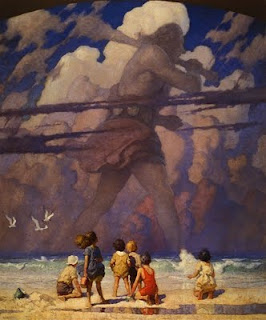 The storm was magnificent lasting from about eight thirty well into the morning today; a good fourteen hours so far. Our last rain was the first of August and we have had triple digit temperatures and a hot, dry thirty mile an hour wind for weeks now; it takes your breath away to walk outside. I have watched with concern as the native grasses of the surrounding countryside became more brittle each day until suddenly I realized it was tinder.

The dry weather leaves had fallen from the trees and were accumulating in crisp piles with the earth beneath them blow-sand and dust. The Black Walnut had begun to cast off her babies prematurely to save her strength, my Pyricantha slowly died and I was worried about my Viburnum when no amount of watering made her perk up. The garden wilted no matter the water applications so the situation had become dire.

Our wildfire season is here and all the rains had gone to the North or the East so hope was fading. Last evening I decided to take action as the radar showed the possibility of rain coming to us was diminishing. I called all my children and told them to give shots of Whiskey to the Four Winds, honoring their power and asking them to send rain. This time I purposefully did not remind them to ask the Winds for mercy… I wanted a storm. I told Michael to get busy doing whatever he felt was necessary to get us some rain! Out came the Maker’s Mark, a favorite by any standards and much more appeasing than Jack Daniels. (We all know the effects of Jack and who wants the Winds to act accordingly?) A shot to the West, the South, the East and the North Winds.

Within minutes the radar showed a shift in the storms and my heart began racing...they were coming! Peter called to say the radar in his tractor had suddenly shown a huge storm; he was rushing out of the fields to home. We took the car to the shop, then I gathered all lawn furniture cushions that I usually race about trying to keep dry and arranged them in a circular pattern… I sacrificed them, not caring if they were ruined. More Maker’s Mark and the Winds began whispering to the trees a storm was coming... they began dancing a tandem waltz. Their waltz became a madcap of twirling as in a whipping frenzy the Winds made their grande entrance!


The storm arrived with lightning flashes that lit the sky, claps of thunder like explosions, hail and driving horizontal downpours. The winds quickly escalated to over 100 miles per hour and the power died. Through the darkness and the blazing lightning, various lawn items could be seen flying past the window and we were ecstatic! A bit more Maker’s Mark maybe… for us.

The blackness of the night, the silence of the house without electricity, the phones dead making communication impossible, the velocity of the storm visible only through the flashes of lightning… it was amazing! Over four inches of rain… my forest floor is finally saturated, my world is saved. In retrospect Michael thought perhaps he should have given shots to just Two Winds rather than all Four of them. Perhaps gathering them all was a mistake...  ah well.
Posted by Catherine Dougherty at 11:35 AM