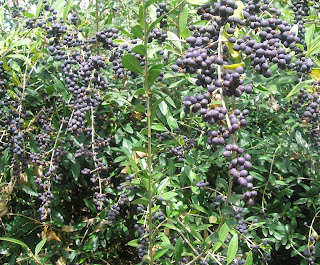 Heirloom Privet berries are about as dark as I can find in my garden.

I had planned to include such a garden in my lower bed to 'celebrate' my 62nd birthday and the marriage of my youngest child... a Mourning Garden as such for the passage of time in a such twinkling.

'For the Gothic gardener or to please the family teenagers, there are a variety of ‘dark’ choices to plant. Black Mourning Bride, of the scabiosa family is a perfect choice. A native of the Mediterranean, it has been in Europe since 1629 and grown here since colonial times. Called the pincushion flower and prized by Victorians, it is still used in Portugal and Brazil as a funeral flower. Its showy and fragrant little blossoms last to three weeks when cut making it a prize for the cutting in the garden. Its flowers also attract bees, butterflies and hummingbirds further enhancing its continued popularity'.

As the idea began to take hold within me, I consulted my gardening friend Malcolm Brown, who is British about inclusion of of Gothic theme. His response is noteworthy for his interesting historical perspective.

From Malcolm:
"O Death were is thy sting
O Grave where is thy victory

Dear, dear Victorians. I suppose you have to blame their Queen for producing such a dour, turgid era fixated with death. Hundreds of inventors created coffin designs for the avoidance of being buried alive. Lots of bells, fireworks and so forth. But almost all of them forgot to include any way for the luckless entombed to breath!

Mourning garden? Well, the Victorians used flowers not as a mark of respect but to help cover the smell of the corpse as it lay in state. As the corpse would remain in the house for three days under constant watch to ensure it was really dead (!) then the stronger the scent the better! Laurel and yew were also used for wreaths. Black was certainly the right dress colour for mourners and would be worn for many months (or even years) after the event. But in fact red and white flowers where generally used for funerals. The strength of the scent may of course be the reason.

Frankly, if I were to design a mourning garden, I would fill it with every vibrant colour I could find. To celebrate a life well lived... Catherine, I have no doubt whatsoever that your life to date has been amazing. And think of the fun yet to come! We are only young twice (or three times, or four, or five)! So use the garden to describe yourself. Lots and lots of bright colours and deliciously strong scents. That’s who you were, who you are and who you always will be. Malcolm"

I loved his perspective! *During my research I discovered there is not a 'true' Black flower in nature. There exists only dark purple or bluish black. However I did discover many sites for the purchase of dark flowers in the Alchemy and Gothic sites should anyone wish to research further or purchase.
Posted by Catherine Dougherty at 8:18 AM