The Queen Has Arrived... 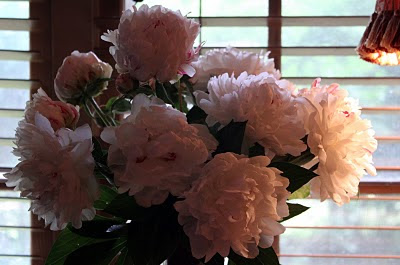 The Queen of Flowers, the majestic Peony, has begun her spectacular arrival at the garden party. The immense blooms can be seen in almost every older garden and are coveted above most other flowers. Breathtaking for the shear size of the deeply lobed flowers and deep green foliage, Peonies make lovely and long lasting arrangements which fill the air with their sweet lemony scent.

The Peony is deeply deserving of the historical praise it has received. Originating in China, it has been celebrated for hundreds of years, adorning Chinese drawings, pottery, and embroidery. The Chinese Peony comes to the garden in hues of pink, pale yellow and purest white, often edged with a hint of rouge on the inner petals.

As with most of our flora, the Peony has Greek folklore attached to the origin of the name. The peony is named after Paeon, a student of Asclepius, the Greek god of medicine and healing. As in most mythology, the gods were often prone to exaggerated human emotions and so Asclepius became jealous of his student’s talents. It was written that Zeus saved Paeon from Asclepius’ wrath by turning him into a flower; he became the Peony where he could live by remaining unseen. However the family name of “Paeoniacae’ was first used in horticultural circles in 1830 when Friedrich Rudolphi named it.

It is impossible to assure blooms on these favorites unless the temperature of the winter months gets low enough for the plant to go into full dormancy. They can not be grown in the Deep South and yet flourish in New England with amazing success and few problems. Although dividing them is often recommended, they will thrive if left untouched for many, many years.

On many Peonies there are often a few blossoms which shrivel and dry when they are about the size of a pencil eraser. This condition may be caused by a number of factors: a lack of fertilizer, a late freeze as the buds are forming, nematodes on the root, or botrylis blight disease. The easiest solutions are often the cure so begin with weekly applications of fertilizer as the first leaves appear. Continue until the blooms begin to open. If this does not assure a healthy plant, then you can assume it is a more serious condition. Next line of defense would be treatment of the blight disease which can be controlled by an application of Bordeaux solution. A combination of lime, copper and water, it is an old remedy and may be found at reputable nurseries. If the plant remains ill after these efforts, it is probably infested with nematodes. They are an extremely offensive and invasive species of roundworm invisible to the naked eye living in the roots and soil. If they are the problem, the plant must be discarded before the infected plant passes the disease to her neighbors.

A healthy Peony, planted in full sun, lightly fertilized, will last for 40 years or more, making them one of the most desirable and elite of all perennials. When planting a new one, prepare for a three to five year wait for full established blooming... it is worth every minute of it!
Posted by Catherine Dougherty at 11:53 AM