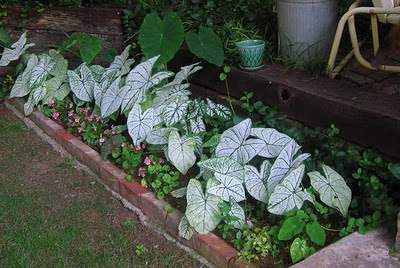 Without doubt it is the year of the Caladium. Driving about town, they appear in almost every garden in splendid glory. A native of South America they have been called “Heart of Jesus” and ‘Angel Wings’ for the intricate structure of their leaves. Since they are tropical and require moisture to reach their zenith they have certainly flourished this year. Planted about the time one plants Okra seed, they are also one of the few bulbs to thrive in the shade. Grown for their spectacular multicolored decorative leaves, they are used on borders, in pots and as garden focal points and look lovely from now until fall.

There are two kinds of Caladium, the fancy-leafed and the lance-leafed, with the lance-leafed the slightly smaller of the two. Since there are over 1,000 named cultivars from the original South American plant, one is assured a color or combination which will fit into every garden scheme. They grow to full size in one season and come in astonishing combinations of red, pink, green or white with colored midribs and contrasting backgrounds and borders.

Each Caladium tuber has a large central bulb surrounded by smaller buds so the larger the tuber, the more impressive the display. You may save Caladium tubers for planting next year by digging the tubers in the fall before they have lost all color. Once dug, spread them on an old screen to dry for a week, cut and remove all the dried foliage, dust the soil from them then pack in dry peat moss or vermiculite for storage. In packing, make sure the tubers do not touch each other and store them where the temperature will not dive below 50 degrees. Keep in mind however that the foliage of bulbs stored in this manner will be smaller and bloom less abundantly than first-year tubers. For less than the price of dinner for two at a fine restaurant, one can purchase an abundance of tubers in the spring, assuring a magnificent show all summer.
Posted by Catherine Dougherty at 7:40 AM