Our Storm and the Hurricanes 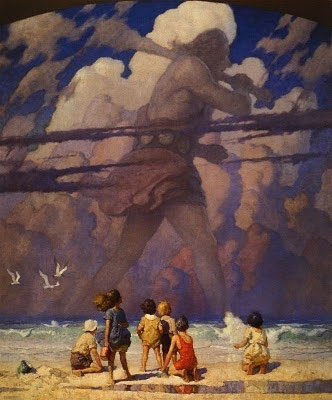 The storm last evening was magnificent, lasting about thirty minutes and pouring one and a half inches of rain on our parched gardens. Our last serious rain was July 17th and we have had triple digit temperatures and a hot, dry thirty mile an hour wind for weeks now; it takes your breath away to walk outside. I have watched with concern as the native grasses of the surrounding countryside became more brittle each day until suddenly I realized it was tinder.

The dry weather leaves had fallen from the trees and were accumulating in crisp piles with the earth beneath them blow-sand and dust. The Black Walnut had begun to cast off her babies prematurely to save her strength, my Pyricantha slowly died and I was worried about my Viburnum when no amount of watering made her perk up. The garden wilted no matter the water applications so the situation had become dire.

Last evening I decided to take action as the radar showed the possibility of rain coming to us; I called all my children and told them to give shots of booze to the Four Winds, honoring their power and asking them to send rain. This time I purposefully did not remind them to ask the Winds for mercy… I wanted a storm. I told Michael to get busy doing whatever he felt was necessary to get us some rain! Out came the Maker’s Mark, a favorite by any standards and much more appeasing than Jack Daniels. (We all know the effects of Jack and who wants the Winds to act accordingly?) A shot to the West, the South, the East and the North Winds.

Within minutes the radar showed a line of storms… they were coming. Our son Peter called to say the radar in his tractor had suddenly shown a huge storm; he was rushing out of the fields to home. We took the car to the shop, then I gathered all lawn furniture cushions that I usually race about trying to keep dry and arranged them in a circular pattern… I sacrificed them, not caring if they were ruined. More booze to the Winds and they began whispering to the trees that rain was coming; they began dancing in a tandem waltz. Their waltz became a madcap of twirling as in a whipping frenzy the Winds made their grande entrance.

The storm arrived with lightning flashes that lit the sky, claps of thunder explosions and driving horizontal downpours. The winds quickly escalated to over 70 miles per hour and the power died. Through the darkness and the blazing lightning, various lawn items could be seen flying past the window and we were ecstatic!

The blackness of the night, the silence of the house without electricity, the phones dead making communication impossible, the velocity of the storm visible only through the flashes of lightning… it was amazing. My forest floor is finally saturated, my world is saved.

As we watch the weather events unfold along the East and Gulf coasts, after our storm, we were reminded that mankind has maintained a continuous struggle against assaults by nature. Catastrophic events have occurred since the beginning of time and have been the subject of vigorous religious and scientific study and discussion.

For thousands of years, countless theories have come to light only to be rebuked by new information. The belief that mankind is responsible for natural disasters is not a new premise. Our responsibility was believed for hundreds of years and was the reason for sacrifices to volcanoes, oceans, farmland, and forests. The argument is compelling and it would be convenient to blame us so perhaps we have an option for change and some measure of control.

Not so! When we study the deserts, which were once lush forests, it is obvious that many natural disasters are exactly that… natural. Although science has made vast advances in the prediction of weather related events, where a catastrophe will occur is still the whim of nature.

All week, I have been reading 'Nature on the Rampage' by Ann and Myron Sutton to better understand the forces of nature. Hurricanes were named after Huracan, an evil storm god of the Caribbean. One of the most devastating hurricanes on record occurred in 1780. It began off Barbados and came ashore where it flattened trees and dwellings killing countless numbers of people. It destroyed an English fleet anchored off St. Lucia, then ravaged the island completely leaving 6,000 dead in its wake. It swirled on to Martinique, enveloped a French convoy and sank more than 40 ships carrying 4,000 soldiers before leveling towns and villages killing another 9,000 people. It finally wound down after destroying Puerto Rico and an untold number of ships and fishing vessels caught unaware in open sea.

Weston Martyr is quoted in the book with his description of a hurricane. He said, "You cannot breathe with a hurricane blowing full in your face. You cannot see either; the impact on your eyeball of spray and rain traveling over a hundred miles an hour makes seeing quite impossible. The blowing sand cuts your flesh and you hear nothing but the scream and booming of the wind, which drowns even the thunder and the breaking seas. You cannot move except by extreme exertion. To stand is to be blown away like a dead leaf. You cannot even crawl; you have to climb about twisting your arms and legs around anything solid within reach". Hang onto your hats!!

*Pic is by the fabulous N.C. Wyeth, photo by me!
Posted by Catherine Dougherty at 2:39 PM