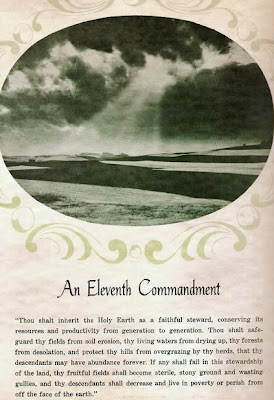 Weather October 15, 2007 presented ominous warnings of drought and deluge and the storms this week seem to have reached fever pitch proportions. The storms gave Oklahoma record breaking rainfall; the former record was set in 1908. I had written, 'Perhaps this is a sign that the next century here will be a lush and prosperous one for Oklahomans'. However the next weather story of the day featured poor Atlanta, Georgia and the severe drought they were experiencing. Always considered the 'Dallas' of the South, Atlanta's three million citizens were expected be out of water in three months.

This week the enormous storms raging across the Plains have set records with tornadoes, rain, and high and damaging winds. I feel our unprecedented human intrusion has tipped the natural order and perhaps triggered some of these alarming weather related events. Possibly it is time to revisit conservation...and hopefully the new politicians elected will respond accordingly.

For those unacquainted with Conservation Districts and their purpose, they were hastily formed in the early 1930's by a Congress on the edge of panic. Along with the greatest depression this nation ever experienced came an equally unparalleled ecological disaster known as the Dust Bowl. Following a severe and sustained drought in the Great Plains, the region's soil began to erode and blow creating huge black dust storms that blotted out the sun and swallowed the countryside. Thousands of refugees raced from the black fog to escape leaving all of their worldly belongings behind to sink into a sea of dust.

The storms were not satisfied with only enveloping the Plains; they eventually stretched across the entire nation. They stretched from Texas to New York in an unrelenting choking pattern of wind and drought. As dust sifted into the White House and onto the desk of President Franklin D. Roosevelt, the problem that began in the Midwest suddenly had national implications. Urgently Capitol Hill called soil scientists to testify. Among them was eminent scientist Hugh Hammond Bennett who threw back the curtains to reveal a sky blackened by dust! Congress unanimously passed legislation declaring soil and water conservation a national policy and priority.

Since about three-fourths of the continental United States is privately owned, Congress realized that only active, voluntary support from landowners would guarantee the success of conservation work on private land. In 1937, President Roosevelt wrote to the governors of all the states recommending legislation that would allow local landowners to form soil conservation districts.

Having experienced the Dust Bowl prior to national notice, Oklahoma created 88 Conservation Districts whose duty and mission is to preserve, protect and restore Oklahoma's natural resources. Assistance is provided to the districts and the public in order to 'foster a sense of care, wise use, and best management of Oklahoma's renewable natural resources'. So great was the priority to protect our resources that the Conservation districts gave complimentary copies of 'An Eleventh Commandment' to businesses and schools.

Written by deeply religious people, the Commandment is posted below:

An Eleventh Commandment
Thou shalt inherit the holy Earth as a faithful steward, conserving its resources and productivity from generation to generation. Thou shalt safeguard thy fields from soil erosion, thy living waters from drying up, thy forests from desolation, and protect thy fields from overgrazing by thy herds, that thy descendants may have abundance forever.
If any shall fail in this stewardship of the land, thy fruitful fields shall become stony ground and wasting gullies and thy descendants shall decrease and live in poverty or perish off the face of the Earth.
Posted by Catherine Dougherty at 8:03 AM