Nandina and Holly for Seasonal Color 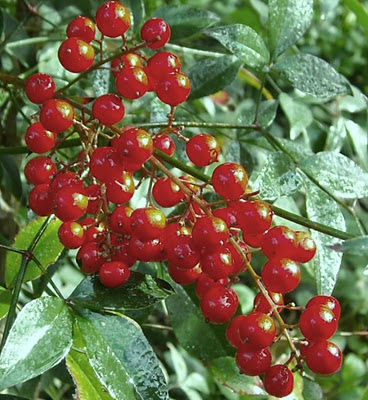 Back in the age before twitter and instant media, back when sitting on the porch stoop visiting with a friend was a way to pass the time, the steps to my childhood home were flanked by two lovely Nandina. Invariably talk included unconsciously plucking the berries, twirling them, then tossing them to the yard, mentally measuring the distance. This practice was much to my Mother’s dismay as she continually monitored her Nandina, counting on the winter display of ripened berries to compliment Christmas. And since they are one of the few shrubs that sport berries which mature in the winter with classic red, they naturally speak of the season in a delightful way.

Nandina, or Heavenly Bamboo, is a hardy species of plant, originating in Asia, common from Japan through the Himalayas. It is not a bamboo at all, but rather a shrub with branches growing from roots and it is evergreen, meaning that it maintains some sort of visual interest all year. In the spring the leaves of the Nandina turn from red to a copper-red tint and tiny white flowers with deep yellow centers appear. As summer arrives green foliage begins to reappear and with fall the color changes yet again as the foliage shifts to a reddish-purple and produces the timely red berries.

Another delightful addition to the winter landscape is the Holly. With approximately 600 species available, there is a Holly for any environmental circumstance and their seasonal red berries and glossy green leaves are spectacular as decorations. The folklore surrounding holly is both ancient and colorful with mention of it as far back as the 15th century. At that time it was noted that they were never struck by lightning thus making them a safe place for refuge during storms. Also it was observed that a good crop of berries foretold of a severe winter.

It was long believed that bringing Holly into the house during the darkness of winter would bring good luck in the coming year and the trees were believed to be protective against witches and other evils. For this reason they were planted near churches and homes, however with the advent of Christianity, the occult beliefs were altered and Christians compared the prickly leaves to Jesus crown of thorns, the red berries drops of his blood.

But old beliefs die hard; a planned roadway in Ireland was adjusted in the late 1990’s after it became public knowledge it required removal of a Holly. No one was willing to risk the bad luck which could ensue from removing one.

As the season progresses, consider colorful and natural elements to add to the inside decor… a walk in the garden or woods will produce some amazing results.
Posted by Catherine Dougherty at 10:47 AM