The Christmas Tree... and the Weather 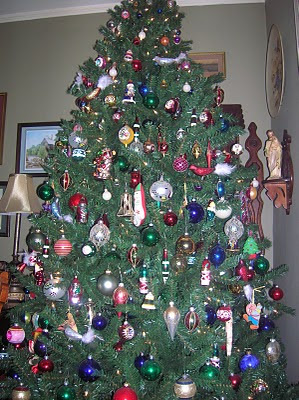 For those who garden, observing the weather changes is practically a religion, practiced as a daily devotional. Over the weekend, winter arrived with blustery winds and drastically dropping temperatures. When watching the national weather one begins to count our blessings even though we are incredibly dry. Our poor neighbors to the north east have been plummeted with too much snow, and it seems there is no end in sight for them. La Niña with her unusually cold ocean temperatures in the tropical Pacific has become part of the current weather system and with this pattern, we may expect little moisture over the winter. According to NOAA's Climate Prediction Center, La Nina, strengthened during August and "Nearly all models predict La Nina to continue at least through early 2011, and will begin to exert an increasing influence on the weather and climate of the United States. These impacts include an enhanced chance of above-average precipitation in the Pacific Northwest and Atlantic North East ." Unfortunately, this excludes the Southwest, and we will remain dry with no chance of a white Christmas.

The lovely evergreens have begun their seasonal show and it is always impressive that they choose the winter, as the world is encased in frosty slumber, to appear in their finery. Bearing fruit or berries despite the cold of winter, they have always been considered quite remarkable and were an important aspect of ancient pagan rituals. The Romans considered evergreens symbols of fertility and used them to trim their homes for the new year while northern Europeans hung them over doors to ward off evil spirits that were believed to stalk the winter landscape. German and Scandinavian people had long made evergreen wreaths to celebrate the Winter Solstice and over time were included in their celebrations of the birth of Jesus.

In 1832 Charles Follen, a German immigrant and professor at Harvard, decorated the first American Christmas tree to share with his family and friends. And in 1846, a young German Prince Albert presented his new bride Victoria with her first tree and thus the English Victorian Christmas was born. Word of decorated Christmas trees spread rapidly and was embraced by almost all Christian cultures; it remains today a universal symbol of the holiday season.
Posted by Catherine Dougherty at 9:22 AM