Fiddle and Faddle... my silly Parakeets 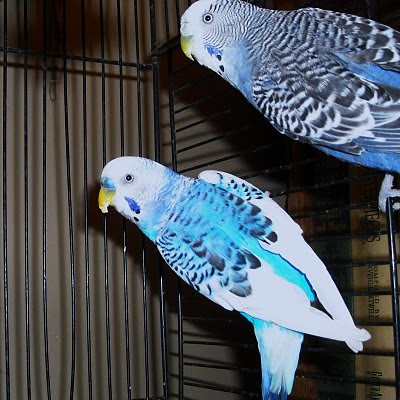 I recall the very first time I discovered caged birds. I was about six and shopping at a five and ten when a cage of young Parakeets caught my eye. I was totally fascinated by the utter joy and excitement of the twenty or so adorable little birds. Then I noticed the price... they were only $3! I almost had enough and excitedly asked Mother if I could borrow a dollar. When I answered her query ‘what for’, she responded as though I was asking for a pony (which I also wanted). No...

By the time I was twelve I owned one and he lived in my room. He was my companion and friend and continued living with Mother and daddy when I left for college. As an adult, I have always had a parakeet in the house and find their noises very comforting; I miss them when they are not part of my ’background’. My oldest friend had passed away a year before and the silence in my home had become deafening when suddenly, by happen chance, I came upon Fiddle and Faddle.

It was early June and Elizabeth, Michael, and I were spending a Saturday morning looking for a treasure at garage sales. We stopped in front of a large two story home and began shopping the contents of tables lined on the lawn. The family were Latino so of course Lize was eagerly checking out the clothes and shoes... Latin ladies have a fabulous sense of fashion which is as festive as their music! (No ‘church lady’ clothes at that sale!) There was a small sound system on the expansive porch playing vibrant tejano music and in the background the joyful sounds of the forty or so Parakeets hanging from various cages on the porch!

Oh my...I was in heaven; I immediately wanted one... or two. Some cages had nest boxes, some very young babies with their mothers, while some held youngsters ready for homes. I picked one with a very distinctive blue band above is beak and another with a pale lavender one above hers… I bought a pair. The lady put them in a pet box and I rushed home to drag out my old cage and deposited my new friends on my porch.

Silence. The babies were totally disinterested in my world... they acted depressed. After several weeks I decided they were in culture shock so I took my radio to the porch and found a radio station playing Banda and cranked up the volume. It was as though Fiddle (he) and Faddle (she) woke from a long slumber. They began dancing then talking, first to each other, then to me! Since my birds are from two cultures they are truly bi-lingual, with Fiddle speaking both Spanish and English! They expanded their musical taste to hip-hop, ‘rock, and even Vivaldi on occasion! I’m so proud of them! 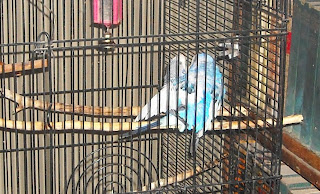 They are nine years old now and several years ago decided they are quite fond of each other. Every morning after the night-cover is removed, they make love... to our utter delight because it is so unusual. Their cage is next to the television so we side wise watch in awe as we have morning coffee and catch the news. Fiddle sidles up to her and 'talks' in a low series of tweets, kissing her beak and neck. Some days Faddle is very enthusiastic, others I fear she has a headache because she will bonk him hard on the head muttering ’No means NO’! On good days however she answers with a series of low tweets meaning 'Alright, let's'.

Afterwards she fluffs and he shudders and then they kiss and murmur sweet nothings for an hour or so before getting to the daily business of living. I love my slightly raunchy, silly, old Parakeets!
Posted by Catherine Dougherty at 12:44 PM