Monet's Garden... and Adapting to Change

February is a time for planning what to do in the garden and often visiting famous gardens of the past provides inspiration. Viewing a book on Claude Monet, the French painter and father of the Impressionistic Painting Movement will provide inspiration for he was a gardener extraordinaire. His paintings of flowers and water lilies are legend and his own gardens were inspiration for them.

In 1883 he moved with his family to Giverney France where he rented an acreage complete with a ramshackle home and out buildings in various stages of neglect and decay. He enlisted the enthusiastic energy of his eight children and the family worked tirelessly for years to create an oasis of beauty. Over time various gardens were enclosed to have a certain view and therefore many gardens contain ‘flower arrangements’ throughout. Often captured in his paintings, his 'arrangements' became immensely popular. As his wealth increased, he purchased the land and adjacent acreages and the gardens continued to evolve.

Eventually the children grew and lost interest in the projects so an undaunted Monet simply hired seven gardeners to help him. His fantastic gardens contain a central walk (allee) with rose covered hoops. There is one section with seven two-tiered pergolas containing roses with Clematis hanging above, draping like lace curtains. A meandering pebble path overflows with nasturtiums which were an 'accidental mistake' Monet loved and repeated each year. Both rare and common species of flowers dance in magical tandem throughout the gardens. In his later years, he used much of his money to purchase rare and expensive species of plants and became ardently interested in botany.

His final project was a water garden complete with a traditional Japanese bridge and although he never traveled to Japan, woodcuts inspired him and the bridge is of his own design. The covered bridge absolutely drips with white and mauve wisteria providing a stunning seasonal effect. Monet endlessly painted his gardens, capturing light and motion, the flowering and falling of petals, the ripple of water… from every angle, through every season. His overwhelming passion for gardening, for art, for living has made his home a French national treasure with over a million visitors a year. (Second only to Versailles).

There is a virtual treasure trove of information about his gardens available both online and in libraries. Why not research the genius of Monet to stave off the house-bound boredom which is bound to emerge in February? Without doubt, even Monet was pleased February is a short month!


Our (Former) North Garden:
View from N. to S.~ preparing to plant the garden below~ Pictured from S. to N. 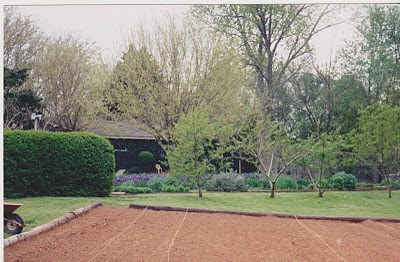 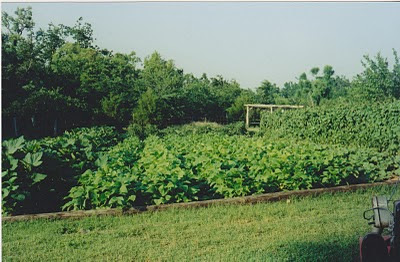 Footnote:
*I can relate to the enthusiasm of his eight children. Our own eight adored projects and our acreage continually evolved with their interests. The north field which was once a massive vegetable garden became a horseback riding ring, a go-cart track, a baseball diamond, and finally a golf course! However, as Monet discovered, children do grow into adulthood and leave home. Since hiring a staff of seven was impossible, Michael and I realized replanting two acres to gardens was too much for us alone... thus the downsizing article. Adaptation is the secret and the garden will evolve... bringing new joy in unexpected ways. Smaller ways~

Horseback riding was a passion for years! 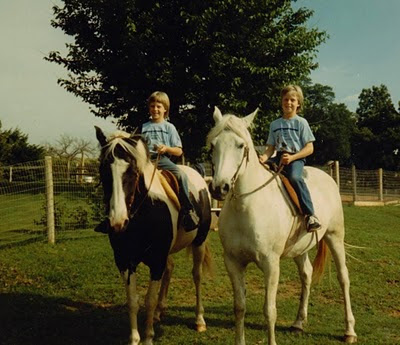 Posted by Catherine Dougherty at 12:45 PM