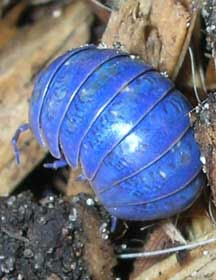 I have always depended upon observation to alert me to changes in the garden. Over the course of years it becomes apparent that some changes are subtle, while others are seasonal and appear quite suddenly. Thus it was with the blue wood louse and the morphing bagworms.

The Wood Louse (Armadillidium)
Children have always been fascinated by the wood louse (roly-poly) and observing and collecting them is a timeworn garden hobby. They have battleship gray segmented ’armor’ with multiple sets of transparent legs and boast the interesting habit of endlessly rolling into a tight marble-like ball. However they are not at all passive for they dine on wood in any hidden and damp spot in the garden, eventually causing massive destruction.

Last summer I observed a portion of them were a lovely sapphire blue. At first I thought perhaps it was the blue/green pellets in miracle grow they had eaten, however research indicates they are infected with a fatal Iridovirus named for the Greek goddess of the Rainbow, Isis. In March of 1954 Mr. Claude Rivers discovered crane fly larvae glowing with patches of blue and is credited with discovery of the phenomenon. Apparently Mr. Rivers was unacquainted with the work of Alfred Lord Tennyson (1809-1862) who had noted it in his poem entitled The Blue Wood-Louse…
‘Bite, frost, bite!
You roll up away from the light
The blue wood-louse, and the plump dormouse,
And the bees are still'd, and the flies are kill'd,
And you bite far into the heart of the house,
But not into mine.’ 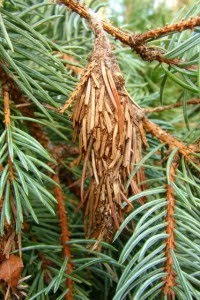 The Bag Worm (Thyridopteryx ephemeraeformis)
Now that the trees are leafless, it is apparent the extent of last summer’s bagworm infestation for they appear in extraordinary numbers hanging on bare branches. First observed last July, the bag worms reached epic proportions and for the first time they attacked the Elms… as though the poor Elm’s don’t already have problems enough with various diseases. In recent years bag worms were seen predominately on the Bald Cypress and Evergreens, but not in enough numbers to actually kill the tree. However last summer many Cedars as well as the Elms were stripped of all life-sustaining foliage and died in the summer’s heat.

Lengthy scientific explanations aside, the bagworm is a particularly nasty pest for it kills its host by sucking the life out of it as foliage is consumed by these camouflaged eating machines. Bagworms begin to build their signature case shortly after hatching and their only purpose is to grow within the case, pupate, mate, then reproduce in the thousands before dying.

In winter many cases seem empty, however in some Mother has laid eggs and the young are growing within the bag. As recommended last July hand-picking is best and cutting the bag in half with scissors is immensely satisfying. Perhaps continuing the summer’s challenge could stave off winter boredom a bit… fatally wounding baby bagworms seems a fine hobby indeed!
Posted by Catherine Dougherty at 7:06 AM