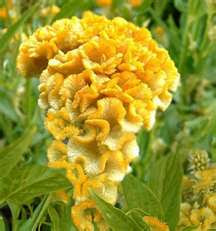 Now is the time when the fantastic Cockscomb appears as the rock star of the garden, taking center stage from now until frost. Of the Celosia family, it is universally grown and adored for its many attributes, not the least of which are the amazing clusters of tiny velvety flowers. The quite unusual flower heads are in swirling waves and twisted rows which resemble a roosters comb; they are the reason for the common name of the plant. The flowers come in shades of deep burgundy and red, orange or yellow and have been a garden staple for hundreds of years. Besides lasting well a cut flower, the heads dry well, and are often used in winter arrangements.

Cockscomb was introduced from Asia to Europe in the 16th century where it was highly cultivated and has since traveled globally. It was grown in our own Thomas Jefferson’s childhood garden at Shadwell and was mentioned in his writings from 1767. Peter Henderson, famed horticulturist, reported in 1890 that Cockscombs were "almost universally grown."

Another miraculous attribute of Cockscomb is the fact that every part of this plant has something to offer mankind. In East Africa, where parasites are widespread, it is medicinally used as a treatment for intestinal worms. It is utilized as a cure for mouth sores, blood diseases, with the seeds used for chest complaints and the flowers to treat dysentery. The leaves are boiled and used as dressings for wounds and sores. Even today it is frequently used as treatment for osteoarthritis of the knee in the United States.

Every part of this magnificent plant is utilized as a dietary staple worldwide. Cockscomb has been a dietary staple in Asia for as long as memory can recall and it is prevalent in South America, tropical Africa, the West Indies, Central and West Africa, and most of South America where it grows wild and is collected as a leafy green vegetable. The leaves, which resemble spinach, are eaten either boiled or fresh and are highly nutritious. Leaves are used are for stew and are also coupled with hot peppers, garlic, lime, and red palm and eaten as a side dish in Mexico.

This popular favorite is perhaps the most unsung hero of the garden for the plethora of gifts it offers. According to the World Health Organization, Cockscomb is among the plants included in their plan to prevent widespread starvation in third world nations. Since it likes it hot and dry and self-seeds easily, it is hoped it will widely expand in drought stricken nations and thus provide a valuable food source for people who have very few nutritious options in their diet. Cockscomb may save millions of lives!

*The infinite wisdom if the divine plan is often astounding… health is just outside the back door!
Posted by Catherine Dougherty at 12:13 PM