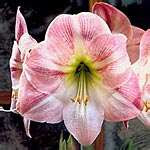 The first of December officially begins the Holiday season and the Queen of all bulbs, the exquisite Amaryllis, is traditionally a guest at many celebrations. A very easy bulb to ‘force’, plan to include at least one this year.

History
As serious exploration began in the 16th and 17th centuries, botanical specimens were among the most coveted acquisitions brought home. Consequently even today there remains controversy over exactly who discovered the Amaryllis and from which continent it originated. Some say it was Africa while others claim it is from South America. Regardless of origin, this exquisite flower had an immediate cult following and the legend which explained her deep scarlet color became widely circulated.

As with so many of our flowers, Amaryllis has both Greek and Roman lore attached to her and the poets Theocritus (3rd century BC) and Virgil (70 BC) both wrote she was a shy nymph of great resolve. Amaryllis fell in love with a popular shepherd reputed to be as handsome as Apollo and as strong as Hercules; he was a rock star of the day and unimpressed by her attentions. Hoping to quell her embarrassing adoration, he gave her the impossible task of finding him a flower that never before existed. Amaryllis consulted the Oracle at Delphi and was instructed to walk to his home and pierce her heart with a golden arrow, allowing her blood to flow. For thirty nights she did so and from her blood sprang the flower with crimson petals.

Napoleon’s Josephine commissioned a painting of an Amaryllis, English Poet Laureate Lord Alfred Tennyson included her in a poem, and Thomas Jefferson mentioned one in his diary in 1811... quite illustrious mention for a flower!

Plan on Forcing One
These precious bulbs, once available to only the wealthy elite, are now easily affordable and readily available at every nursery. Colors include the traditional red, white, deep pink, orange, and shades of salmon, pink, and rose. 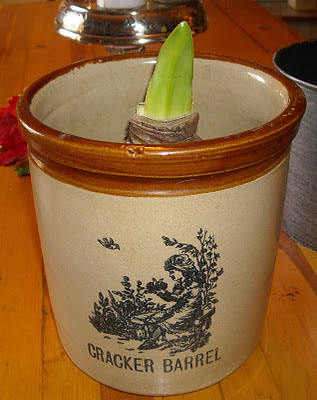 Choose a deep, snug container to support the foliage and hug your bulb. Allow for three inches below the bulb for the roots and fill it half way with potting medium. Gently press the bulb into it leaving the neck exposed. Water the bulb lightly and give it a shot of gin to prevent foliage wilt. Keep the medium moist but not soaked and expect your bulb to begin flowering within three weeks. Happy Holidays! 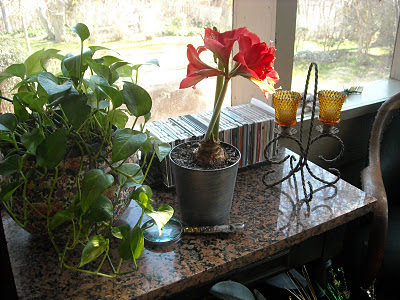 I accidentally planted different bulbs in the same wooden bowl... apparently the lovely white grows with a much longer stem. 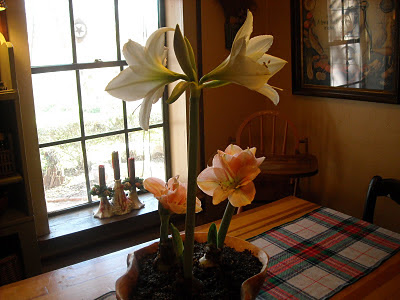 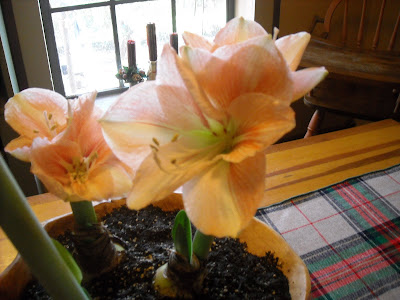 *While at Lowe’s over the weekend, I could not resist releasing the poor Amaryllis who had sprouted and whose foliage was crumpled within the box... as I opened their boxes I could sense a collective sigh of relief as they looked beyond their cardboard confines.
Posted by Catherine Dougherty at 9:32 AM