Winter Cold and The Secret Staircase 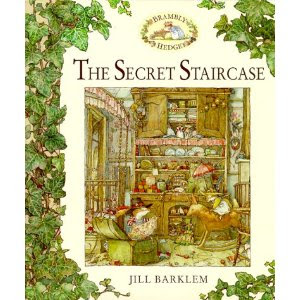 Lovely stories are contained in the series~
I'll be reading them to Julia soon.

Winter has arrived with a vengeance and making it all the more cold is the cutting wind and drizzle. It reminds me of the winter storms which took place in January of 1986 when we had weeks of icy cold and snow. I shall never forget it because my sister was visiting with my two small nieces... being house bound with eight children under the age of nine is unforgettable!

About this time in December I am reminded of passages from one my favorite children’s books, The Secret Staircase, by Jill Barklem. The series of her stories stars a clan of adorable mice living in a charming, twisted, ancient Oak full of secret rooms within. The festivities portrayed are the old Anglo-Saxon celebrations of the Yule season. Yule is the ancient word for the months of December and January; December was “the former Yule”, and January “the after Yule”. The Vikings burned a Yule log to honor Thor, their god of war.

Originally designed to as a way to keep winter at bay and people from going mad from loneliness or cold, these festivities are still incorporated into the way we celebrate the season... with the addition of Jesus as our Christian centerpiece. Many of our holiday traditions including banquets, greenery, generosity, and cheer come directly from these ancient pagan customs.

The little poem in the book is rather timely considering the season and the cold we are experiencing lately: 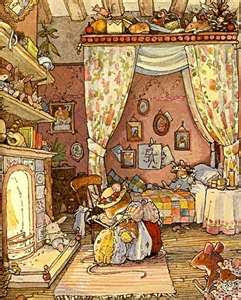 Midwinter
When the days are the shortest, the nights are the coldest,
The frost is the sharpest, the year is the oldest,
The sun is the weakest, the wind is the hardest,
The snow is the deepest, the skies are the darkest,
Polish your whiskers, and tidy your nest,
And dress in your richest, and finest, and best….
For winter has brought you the worst it can bring,
And now it will give you,
the promise of Spring!
Posted by Catherine Dougherty at 7:28 AM