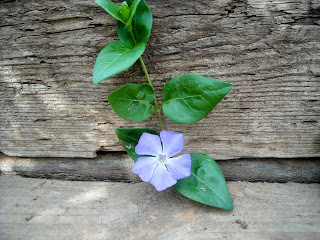 The months of January and February are the most difficult for gardeners. It is not yet spring and we have a desperate need for greenery. Houseplants really do not suffice perhaps because there is so little action in them. They are simply “there” and produce little excitement for the gardener who relishes each visual thrill of the outdoor garden. The weather has been
yo-yo, the winds have been wild, and over the weekend foolish geese were seen flying North. The blissful 70 degrees possibly spoke to their instincts without mention of Northern snow warnings.

With the warm weather the precious Periwinkles have begun to bloom. They are always among the first arrivals in the spring, and so their presence speaks of good things to come. They are actually Vinca minor, and their common name comes from their lovely lavender-blue color. It is such a distinct shade that it is listed as ‘periwinkle’ on the color chart and has its own Crayola crayon!

Vinca minor is a very hardy short trailing sub shrub that travels along the ground while maintaining ever green glossy leaves. The sweet flowers will begin to bloom at first spring and continue through fall. If they are cut and placed in a vase, they will continue to put on new flowers for weeks, making them a very welcome guest during the winter months.

Vinca minor is commonly planted under trees where grasses have no chance of survival and also to stop erosion. It is extremely hardy and deer resistant and withstands drought with amazing success. A testament to its hardiness is our rather reckless transplant from an abandoned farmhouse… no special care was afforded the sprigs and yet they survived and flourished in deep shade.

Since it is rarely bothered by pests or disease, its tendency to travel has placed it on the infamous ‘Invasive’ list. It should be cautiously planted far from traditional flower beds since the tendrils will grow to 5-10 feet or more and then put down roots wherever they please.

Hybrid Vinca (Catharanthus) is an extremely popular annual requiring sunshine. Differing from its cousins who dress only in blue, it comes in a spectrum of Candyland colors and growers produce exciting combinations each year. Often they will self-seed and appear as tiny babies mid-spring the following year. Be careful not to disturb the infants while working the bed early in the season... they will appear after the first weeds have made an entrance.

Vinca held this low spot on the third level by the swing... it lasted well throughout the drought. 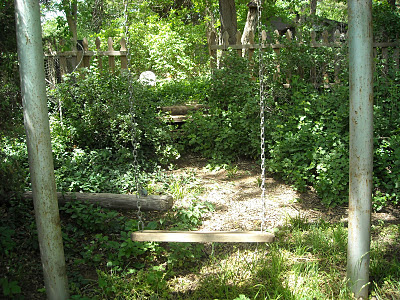 Posted by Catherine Dougherty at 8:41 AM