Suddenly, almost overnight, fairy rings have begun to appear on lawns and golf courses. They are a naturally occurring phenomenon of fungus growth that is seeking food underground and consist of a large circle of either dead or dark green grass, sometimes with toadstools. They are more prevalent following a dry year, which is exactly what we experienced in 2011.

Obviously before science, mankind arrived at bizarre superstitious explanations for everything that was out of the ordinary, and Fairy Rings were no exception. Occupying a prominent place in European folklore, they were also called elf or pixie circles and were said to be the location of gateways into elfin kingdoms where fairie folk gathered to celebrate spring. The ring will disappear without trace within five days, but it was said if an observer waits for an elf to return to the ring, one may capture it.

In German tradition, fairy rings were believed to be the gathering place of witches on Walpurgis Night and the fact that St. Walpurgis was a deeply religious nun who brought Christianity to the Germans seems have no bearing on the fact her night is called ‘witch’s night’. Traditionally on April 30th, witches would gather to dance all night leaving the ring behind to mark their celebration. In the region of what is now Central Europe, folklore believed that fairy rings dealt with magical flying dragons; when a dragon had created such a circle, only toadstools would be able to grow there for seven years.

According to European folklore entering one was extremely bad luck as they were guarded by huge toads who could place a curse upon mortals. One could soon lose sight in one of their eyes while young girls touching dew inside a fairy ring would develop skin problems. There were warnings against children entering the ring as fairies could kidnap them or follow them home and wait until the child was sleeping before slipping a changeling into their place. *A changeling was the child of a fairy, elf, or toad and no one spoke of what happened to the human child who disappeared. Maurice Sendak addresses this in his award winning book Dear Mili.

Science today advises all above is utter nonsense and that the dark green is simply the presence of additional nitrogen. And some fungi may also produce chemicals which act as hormones which affect plant growth, causing the rapid luxuriant growth. Regardless... I think children should avoid Fairy Rings at all cost. 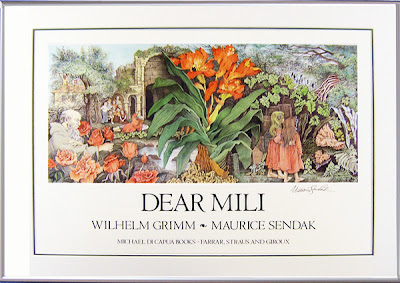 Posted by Catherine Dougherty at 9:04 AM