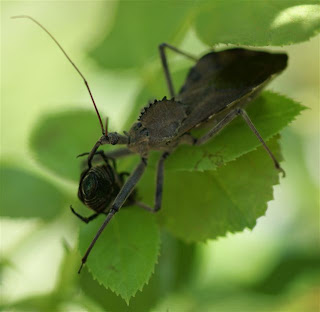 February has almost arrived….thank goodness it is a short month for it is most boring for the gardener. The weekend was extraordinary with mild temperatures in spite of the wicked wind. With our relatively mild winter, the bugs have enjoyed relaxing with no fear of dying and so over the weekend hoards of immature Assassin Bugs could be seen moving about.

First described by the Danish biologist Johann Christian Fabricus in 1803, the species is found not only in the United States, but also in Mexico, Central America, and as far away as central Argentina. With their uncanny ability to ambush and devour garden pests they are quite popular and in the Southern hemisphere some Assassin Bugs are kept as pets while others are carefully raised to be released into gardens and fields to control aphids and caterpillars.

The youngsters are seen now because adults who have wintered in the shelter of dead leaves, and vines, emerged several weeks ago to lay masses of eggs on the undersides of leaves. These eggs hatched within ten days and now the young will begin passing through evolving changes to become mature adults by summer.

A favorite Assassin Bug of North America is the Wheel Bug, who is a shy, reclusive fellow, preferring to stay out of sight. The name comes from the knobbed ‘cogwheel’ crest that rises across the back of the bug, which is believed to serve as a visible warning to possible predators. The camoflaged gray to brownish gray adults are among the largest of the garden insects, measuring up to an inch long. The young nymphs, which do not yet have the wheel-shaped structure, have bright red or orange abdomens… these are the bugs now seen on the move.

A true killer, the Wheel Bug is capable dispatching pests as large as the dreadful "horntail" caterpillar who destroys tomato plants. Of course, any insect that can cannibalize another, has the ability bite anything… including humans. However since they do not normally bite unless in self-defense and since they possesses two scent sacs that may be fired as a warning, take olfactory heed and do not disturb them. Their bite is painful and if one accidentally crushes a Wheel Bug while in the garden, skin contact with the goo will burn for days. They are extremely interesting as well as a benefit to the garden… simply allow them room to work and treat them with respect!

Posted by Catherine Dougherty at 9:19 AM