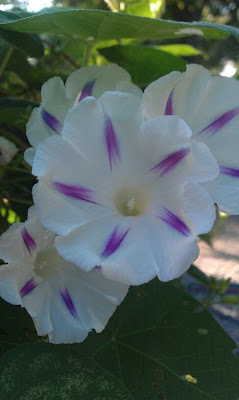 This is the time of the summer when the spectacular Morning Glories have reached their zenith, climbing almost any vertical surface at a surprising growth rate of up to inches a day. In direct contrast to the Moon Flower, which is the same family, the flower of the Morning Glory opens with the dawn and lasts but one day, finishing the flower cycle by evening. However since it is a prolific bloomer, there is not a summer day that does not include lovely new blooms for the entirety of the season.

Wild morning glories have been traced back to ancient China where they were used for medicinal and ceremonial purposes. The Japanese first cultivated the flower for ornamental use in the 9th century and it is celebrated in both culture and art.

Artifacts indicate that over three thousand years ago, many South American civilizations had discovered when morning glory seeds were added to the substances from the rubber tree, a bouncing rubber ball was produced. The sulfur in the seeds was the key and the ancients used the exact same process supposedly ‘discovered’ by Charles Goodyear in 1844.

The flower lasting but one day led to romantic folklore and in Victorian times the fleeting flowers represented the fickle nature of love while the profusion of new blooms symbolized the renewal nature of affection. At that time images of morning glories were used on tombstones where they were a symbol of the shortness of life.

Besides the traditional blue there are many new varieties in an astounding array of colors making this charming vine a welcome addition to any garden. With drought and poor soil tolerance, rapid growth habit, and amazing twining ability, the morning glory has long been used to shade porches, easily climbing a trellis to provide cooling relief on hot summer days.

It is an annual, meaning it must be planted each year and will die at first frost. Collection and storage of the seeds as the season progresses is economical however it should be mentioned the seeds contain an hallucinogen. For this reason the seeds are considered dangerous and must be stored away from children and pets.
*Photo Credit: Linda Perfield
Posted by Catherine Dougherty at 11:26 AM