Sunday was a perfect day for a drive to see if the foliage has yet begun to change and although the foliage was unremarkable, we did see a most unusual happening. Mother Nature apparently sent a message about the change of seasons for as we drove by a large pasture of brown grasses, a Red Tailed hawk could be seen quietly sitting on the ground. It was notable because it is unusual for Hawks to sit and also because there was another Hawk resting nearby. Hawks are rather solitary in habit so we stopped to better observe this unusual occurrence.

Lo and behold, the entire field was full of Hawks blending with the grasses…. all gathered calmly as if at an outdoor market. The blue sky began to fill with Hawks who were circling to land as though they had been telepathically summoned by those already attending the sit-in. Soon their numbers reached a hundred or more, all waiting patiently for some internal signal.

All at once they began to take flight and Hawks from adjacent fields joined them. As we watched in amazement hundreds of Hawks began the phenomenon bird watchers refer to as ‘kettling‘.

‘Kettle’ is the term used to describe the graceful acrobatic wheeling performed by a large flock that is beginning migration. Kettling birds catch a warm thermal updraft and begin swirling in a circular motion, going higher and higher as more birds join the wondrous dance... they literally floated with a quiet, graceful, and steady movement of feathered flight. It was mid-afternoon and the sight was beautiful as the light caught the underside of their wings. They continued ever-upward until the first birds appeared only as small dark specks in the blue sky. And then, as suddenly as they had appeared, they were gone. They will go South now and not return until spring. 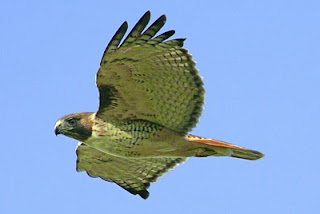 Sometimes happenchance will give a delightful surprise if one is simply at the right place at the right time! We feel incredibly blessed to have witnessed such a rare and wondrous sight. Watch carefully for the Hawks will continue to kettle for several weeks… perhaps, just maybe, you will see one.
Posted by Catherine Dougherty at 1:06 PM