The Rose of Sharon and the Korean Connection 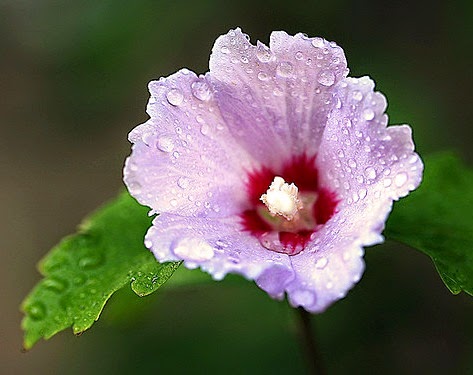 Summer is always hot and one of the most lovely trees begins flowering as the temperature climbs. The Rose of Sharon, of the Hibiscus family, is a deciduous shrub or tree who adores the heat while tolerating dry spells very well. It may be left as a shrub or pruned to grow as a single-trunk tree of mid height. Of course it has an intricate historical and political history.

Rose of Sharon, a native of Asia, is the national flower of South Korea… its Korean name, ‘mugunghwa‘, means ‘eternal’. The ancient Silla Kingdom that ruled Korea between 75 BCE and 935 AD adopted it as its symbol as did the Joseon Dynasty, which ruled the country between 1392 and 1910. The ancient Chinese referred to Korea as the “the land of gentlemen where mugunghwa blooms” in reference to the flower. It is of such import that it is and it is often portrayed in paintings, on wall murals, and in Korean architectural features.

Prior to liberation from Japanese rule in 1945, Nam Gung-eok, a Korean gentleman and scholar, sent tens of thousands of the small trees from his home to public places throughout the country so they might be planted in ‘hills of Roses of Sharon’. He hoped for them to symbolize Korean optimism and hope, while making the statement the people refused to be subjugated. Naturally he was arrested and sent to prison in what would later be called the "the mugunghwa incident". Following liberation from Japan, the Korean government adopted the hibiscus as their national flower.

Light or little pruning will allow the Rose of Sharon to stay a bushy shrub, blooming profusely with small flowers. To create a single trunk, it must be pruned in late Winter and the result is fewer, yet larger flowers. Varieties have flowers ranging from white to pinks and lavenders… and each will sport the deep crimson of the petal center.

Red hibiscus is often cited as a medicinal curative to lower blood pressure and cool the body while the flower is used as a seasoning and the tuber eaten as a vegetable. It is joyful in full sun and will do well in average soils. Blooming from now until late Fall, their profuse flowers make this shrub a most attractive addition to the garden.

Posted by Catherine Dougherty at 4:32 AM