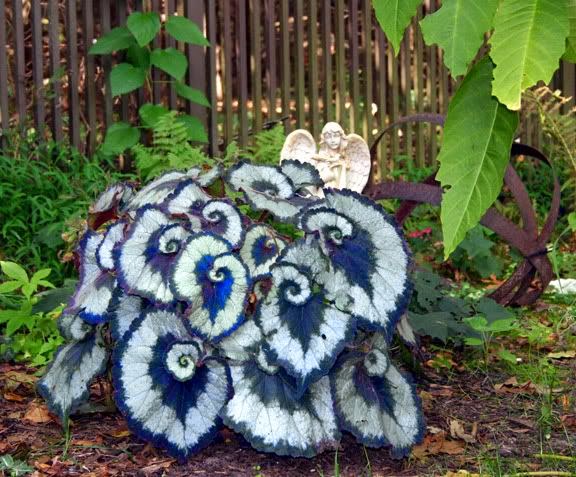 Winter arrived Monday morning with unexpected temperatures in the teens accompanied by a frosty wind.  Naturally Punxsutawney Phil, the Pennsylvania Groundhog, predicted six more weeks of Winter. The fact a groundhog is the principal seer, the most-wise consultant, is a bit silly, however the well respected Farmer's Almanac had also predicted a harsh winter.

Perhaps 2015 will be the year of the Begonia, a large family of most interesting plants. The Begonia was commonly thought originate Brazil,  however history has shown  the Chinese used them medicinally as early as the 14th century. Uses varied from disinfecting wounds to reducing swelling, and easing the symptoms of a cold. Often the sap was used to stop a tooth or stomach ache or cure a kidney ailment, . The first documentation of their discovery was by a Franciscan monk, Charles Plumier, who found fibrous begonias in Brazil in 1690 and shipped them back to Europe.

Since Begonias originate in tropical regions they require warm temperatures to flourish... their favorite habitat is the forest where they thrive at the feet of the old growth trees. Therefore, the gardener must attempt to duplicate those conditions for them to do well... deep shade, nice mulch, slightly moist soil are perfect for them.

The most popular Begonias belong to the tuberous family who thrive nicely in a container. Since shade is a requirement, while container-bound they may be easily moved as garden shade changes during the course of the season with the journey of the Sun.

Wax Begonias are among favorites for summer garden plantings as well. A member of this group is the fantastic 'Dragonwing' Begonia, who has larger leaves and flowers than her normal counterparts.
In considering Begonias remember to include the most interesting of all.... the amazing 'Escargot', with intriguing multi-green leaves which swirl about into a small circle at the leaf center. She may grow to be an extremely large tropical plant and is indeed a show-stopping focal point in any garden setting.

Most begonias are easily propagated by from stem cuttings. After cutting sections plant them in a potting medium and if tenderly checked, soon small wispy root tendrils may be seen... baby Begonias are being born! By performing the simple process of propagation, you may easily increase your number of Begonias without the cost of purchasing additional plants.

Photo: Escargot Begonia via Douglas E. Welch
Posted by Catherine Dougherty at 9:57 AM