The Importance of Milkweed 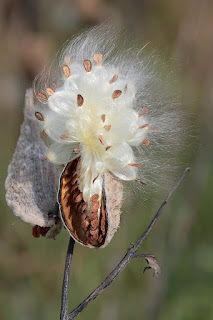 Although the weekend included a biting wind when at last the sun began to shine, spirits were lifted, luring the gardener outside. The ninety plus tulip and Jonquil bulbs discovered hiding under the porch couch were finally planted... they are grateful for dirt-time to rest a bit before their arrival at the garden party this spring.

All of the publications about gardening of late have included information on the importance of Milkweed in the landscape and the reasons for it resonate far beyond the innate beauty, which is unmistakable.

The modern classification of plants and their uses begins with Carl Linnaeus, a Swedish botonist, physician, mineralogist, and zoologist, who is considered the father of ecology. Born in 1702, by the time of his death in 1778 he was the most acclaimed scientist in all of Europe. He classified Milkweed in 1753 and named the genus after Asclepius, the Greek god of healing. The genus contains over 140 species and is named for its milky sap, which contains latex and alkaloids... Milkweed is vital for the survival of our lovely butterflies.

Milkweed produces some of the most interesting flowers in the plant kingdom, with pollination accomplished in an unusual manner. Rather than go into detail, it will suffice to say Nature's whims are often scientifically complex.

The uses of Milkweed vary greatly...
The floss (hair-like filiments) was introduced in 2007 as a hypoallergenic filling for pillows, in 2015 an industry was developed in Quebec using Milkweed silk in the manufacture of thermal clothing, and the highly absorbant fibers are used to clean up oil spills. The high sugar content of the nectar fostered Native American use of it as a sweetener while in contrast some tribes in South America and Africa embraced the toxic aspect of the plant to poison arrows for deadly hunting. An animal who consumes more than 10% of their body weight will die and thusly, ranchers have sought to eliminate Milkweed from the prairie.

Since leaves of the Milkweed are the only source of food for our beloved Monarchs, whose numbers have dropped alarmingly in recent years, it is important to include this lovely plant in the garden...the butterflies are dependant upon our intervention for their survival.

Posted by Catherine Dougherty at 9:25 AM