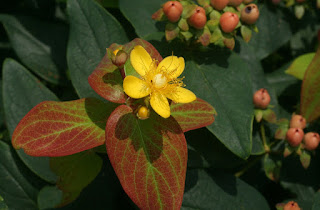 Since another cold snap is expected and we are not yet through February, perhaps consider adding some Wort to your supplements. It has a long and colorful history and has been considered an important plant since ancient times... there are over 400 species worldwide. From the time of the ancient Greeks down through the Middle Ages, St. John's Wort was considered to possess magical powers and was used to ward off evil and protect against disease.

Since the time of the ancient Greeks, St. John's Wort has been used to heal wounds, remedy kidney troubles, and alleviate nervous disorders, including insanity.  Early Christians named it after John the Baptist and claimed that red spots appeared on leaves on August 29, the anniversary of the saint’s beheading.

The tops of the plant were also considered effective for keeping away ill fortune and bringing luck. Bringing flowers of St. John’s wort into the house on a midsummer eve would protect one from the evil eye, witches, or fire. In one case in 1696, an evil spirit was terrifying occupants of a home in London until St. John’s Wort placed under pillows exorcised the apparition.

Culpeper (ca. 1650) wrote 'it is a singular healinng wound herb' and as an ointment 'it opens obstructions, dissolves swelling and closes up the lips of wounds.'  St. John’s Wort was used to cure ulcerations of the ureter and kidneys, and for jaundice, gout, and rheumatism as well as injuries to the spinal cord. Native Americans used it as a snake bite remedy and for bruises.

Recent research matches ancient thought and American herbalists still use St. John’s wort for many of the same conditions for which it was recommended throughout the ages. In Europe preparations are commonly prescribed by medical doctors for burns, ulcers, nervous disorders, and depression.

This cheery plant spreads rapidly by means of runners so I recommend putting it into a pot to contain it... it is indeed another miracle plant.
Posted by Catherine Dougherty at 9:57 AM