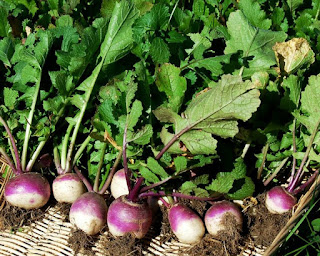 Turnips originated in the Mediterranean region and spread from there to the Middle East and western Asia, with European cultivation predating the Middle Ages. They still grow wild in parts of eastern Europe and western Russia. Turnips arrived here early... they were first  cultivated in 1622 Colonial America.


First described by Theophrastus in 400 B.C. and later by our favorite Greek, Pliny the Elder, turnip cultivation was well established by Greek and Roman times. Low in calories, high in nutrients, turnips were lauded by Pliny who described them as one of the most important vegetables, stating 'it should be spoken of immediately after corn, or the bean, for next to these two productions, there is no plant that is of more extensive use.' Besides human consumption, turnips roots and greens are healthy fodder for farm animals.


The turnip is a close cousin of cabbage, broccoli, Brussel sprouts, argula and kale. This group of vegetables are often overlooked however they have a powerhouse of health benefits. Turnip roots are high in dietary fiber, vitamin C and B6, folate, calcium, potassium, and copper. The greens are an excellent source of vitamins A and C, as well as a good source of calcium, iron, and riboflavin, all of which are important for maximum health.

Turnip sprouts provide high levels of glucosinolates, sulfur-containing compounds which protect against some forms of cancer and provide antifungal, antibacterial and anti-parasitic benefits. They also contain a category of nutrients called indoles. According to the Linus Pauling Institute, indoles in turnips may reduce the risk of lung and colorectal cancers. A tissue culture study found that brassinin, a type of indole compound, killed human colon cancer cells... turnips may be a miracle cure. *Dr. Pauling was among the first to correlate cancer with diet.


For a nagging cough or at the start of a cold, boil some turnips, strain, then drink the cooled water to eliminate it almost immediately; this drink will also stave off other viral infections.


Turnips keep well either harvested and stored in a cool place and they may also be left in the ground and harvested as the need arises. Gowing in uremarkable soils, they have been historically used to staved off famine in turbulent times and they have long been a staple of rural dwellers. They grow well in cool soils so plant some now and they will be ready to harvest in three months...  more may be planted in the fall for an early spring crop.
Posted by Catherine Dougherty at 11:58 AM