The Native American Gathering of Nations 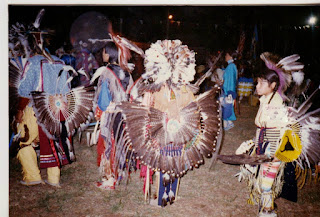 We watched 'Dances With Wolves' last evening and it brought back bittersweet memories of our time within the Native American culture of the 1990's. The magic of the culture still existed... the elders were still living and tribal spirituality was an everyday way of life. The open generosity of Native Americans was to be envied for it included the belief that the measure of a person was not what you could amass personally, but rather what you could give to others. To admire a possession belonging to a Native American was for them to bestow it upon you. Condemnation was not in their vocabulary and laughter ran freely. I learned that Pow-Wow's were not a benefit where the promoters made money, but rather an event where they gave all that they could to each person attending asking only for collective prayers for the honoree.

I would arrive at a camp with smoke drifting to the sky in the darkness above tepees, the drum beat as background music of another time, and my heart would leap. It called to me in an unimagined way and I felt at home there. To have been called to the grandstand to be honored and gifted by the Head Lady Dancer before the Gathering of Nations and a crowd of 5,000 Native Americans was truly one of the highlights of my life. The welcoming, the polite introductions, the respect and old fashioned manners reminded me of my childhood in its sense of propriety.

However there is another story about me being honored at the Gathering of Nations. Honoring me came as a complete surprise to me and I was totally unprepared.

As we entered the camp ground at the Gathering of Nations, I noticed that in addition to the familiar and Arapaho tribal members there were representatives of many Native American tribes I did not know. The regalia is quite different from tribe to tribe so various tribes may be identified by their clothing and bead work, shawls and embroidery, porcupine quills and feathers. The intimidating and traditional Sioux from , the Grovan of South Dakota, the from , the austere Pawnee of eastern as well as many other tribes were all gathered there. Since this was not an event for tourists, I was rather intimidated and hoped to blend in as inconspicuously as possible, which is no easy feat since I am so blond. Not particularly dressed for festivities, I moved to a group I knew well and sat down to enjoy the dances. The little girls in their waving shawls imitating butterflies, the men portraying the stampede of the buffalo and the flight of eagle, the women whose feet caressed Mother Earth… all beautiful and exciting.

As I had stood to go, I had accidentally stepped on one of my trademark high top Converse shoe strings untying it; unbeknownst to me it was left to dangle and dance with each step I took. With abject horror Michael noticed immediately and watched as the shoe string whipped back and forth, back and forth with each successive step. Later he confessed that he prayed "Please God, don't let her fall, please don't let her fall" as a mantra hundreds of times...one prayer with each of my foot steps.

Michael appeared, smiled and nodded to everyone,  and gently took my arm, pulling me aside. He whispered in my ear….. 'For the love of God, tie your damn  shoe string; you almost gave me a heart attack!'
Posted by Catherine Dougherty at 7:36 AM