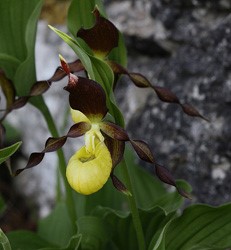 For those who felt that orchids were fussy little things growing inside within controlled temperatures, last week a surprising orchid story emerged. On July 23rd an article about millions of orchids now growing in a one hundred-acre wetland in upstate New York was published. The wetland, located at the site of the former Benson Mines, had formed from residue that developed on waste from the vast open-pit iron mine. According to scientists, the transformation is most impressive because it happened naturally. The wetland, which remains privately owned and off limits to the public, formed on part of thousands of acres of coarse sand left over when granite ore was crushed to extract iron from 1900 until 1978. That bare sand eventually gave way to moss, lichen, grasses, sedges and trees, including willows, poplars and tamaracks. Orchids arrived with the winds as dust-like seeds from surrounding areas. The wetland is now home to six species of bog orchids, including millions of rose pogonias and grass pinks.


"I've been involved in orchid-rich habitats all over the country for 40 years, and I've never seen anything like this," said Donald Leopold, a professor at the State University of New York College of Environmental Science and Forestry. He believes fungi colonized a plants root system and enhanced its ability to absorb nutrients… he was astonished the site went from bare mine tailings to a diverse wetland plant community in a scant 60 years without any attempts at restoration.


In 2012 in a small two acre cranberry bog in east central Pennsylvania, two of the rarest orchids were discovered. The bog, ringed by sphagnum moss, is located at the edge of Valmont Industrial Park where an underlying layer of hard coal had created an extremely acidic, nearly sterile environment making the bog discovery even more significant. The rare Valmont orchids have a hyacinth-like ball of small, delicate blooms at the top… one is white-fringed, the other is yellow. Natural cross-pollination between the two has produced hybrids in an amazing array of exotic colors that have been seen nowhere else in the orchid world. Bob Sprague of the Native Orchid Conference has been working with local Pennsylvania groups to create a nature preserve to protect these as well as other amazing and unusual plant species growing nearby which include Bladderwort, Butterwort, Sundew and Venus Fly Trap.

With the unrelenting heat, good gardening news is rare, however these stories reinforce our belief that Nature has a mind of her own and that she possesses a will to create beauty in spite of all odds… they are a testament to Natures ability to heal herself.

Photo: From the Valmont Park site

Posted by Catherine Dougherty at 9:22 AM