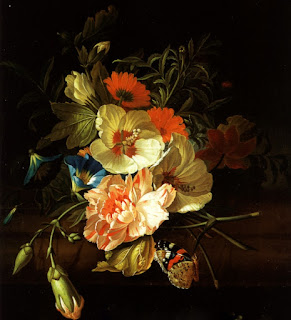 The Hanging Gardens of Babylon built by King Nebuchadnezzar II around 600 BC were considered one of the Seven Wonders of the Ancient World… quite an honor for a garden! Many royal gardens in Europe have been cherished for generations and Prince Charles of Britain has restored many while pressing a national gardening agenda. Our own Thomas Jefferson was more pleased with his gardening innovations at Monticello than all of his diplomatic successes and even his Presidency. He avidly collected seeds, cuttings, and plants from his travels, bringing them home and carefully documenting their successful progress or failure. We have him to thank for introducing many of the species we now consider standard.

In the 18th and 19th centuries, the cramped and simple gardens belonging to poor laborers and factory workers in Europe were the birthplace of florist’s flowers as we now know them. A lovely example is the magnificent Carnation which was once a quarter-sized Dianthus. Petals were doubled and redoubled as enthusiastic breeders toiled in their tiny spaces after working long hours at grueling jobs. Their joy is apparent in the creations they have bequeathed us and we are grateful for their efforts.

The realization that gardeners will garden regardless of hardship or circumstance is comforting. We are called to the soil for there is perpetual harmony in gardening and it knows no boundaries.