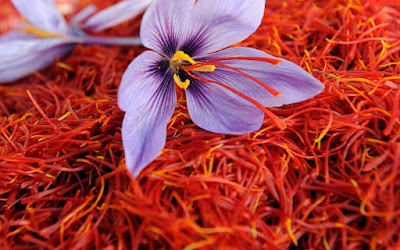 Spring is in full swing and the lovely spring crocus are peeking above the ground, reminding us that the early arrivals will be punctual. Native to southern Asia, the Netherlands now control much of the market by producing hybrids of amazing breadth and color. Crocus grow from corms and were introduced to the Netherlands from the Holy Roman Emperor's ambassador in the 1560s. A few corms were forwarded to Carolus Clusius at the botanical garden in Leiden and by 1620 new garden varieties had been developed.

Hardy perennials, the plants are found naturally in a wide range of habitats, including woodlands and meadows. However the most fascinating species of all is the Crocus Sativus, which blooms in autumn... saffron, one of the most ancient and celebrated of all spices, is produced from the scarlet stigmas. It takes a mind boggling 75,000 blossoms or 225,000 hand-picked stigmas to make a single pound which explains the expense of this exotic spice... it costs approximately $120 an ounce!

Research yields that Saffron-based pigments have been found in 50,000 year-old depictions of prehistoric beasts in Iraq. Sumerians used wild saffron in remedies and magical potions. Ancient Persians cultivated saffron for personal use or trade and by the 10th century B.C. saffron threads were woven into textiles, offered to divinities, and used in dyes, perfumes, medicines, and body washes. Saffron threads would be scattered across beds and mixed into hot teas as a curative for bouts of melancholy. During his Asian campaigns, Alexander the Great used Persian saffron in his infusions, rice, and baths as a curative for battle wounds. Alexander's troops mimicked the practice and brought saffron-bathing back to Greece.

European cultivation of saffron plummeted following the Roman Empire's fall however the spread of Islamic civilization allowed reintroduction in Spain, France, and Italy. Saffron was widely sought as a curative medicine and during the Black Plague of the 14th century, demand exceeded local availability and much of it had to be imported by ships from southern Mediterranean lands. The theft of one such shipment by noblemen sparked the fourteen-week "Saffron War". The conflict and resulting fear of piracy spurred significant saffron cultivation in Basel, which grew prosperous from saffron alone.

Cultivation and trade then spread to Germany where the price of the spice tempted many growers to add various ingredients such as beets to the mix. These epidemic levels of saffron corruption brought on the Safranschou Code, under which those convicted of altering saffron were fined, imprisoned, and even executed.