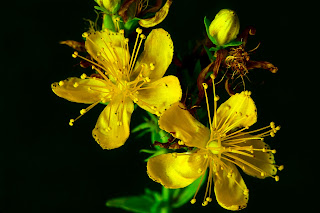 This Winter plan to include St. John’s Wort as a dietary supplement. The ancient Chinese have long considered it among their most important herbs however it fell out of favor in the west in the 1800’s. For centuries, St John’s Wort had been used to treat disorders from digestive problems to coughs, and it was lauded for its action as a sedative. During the 1970’s research confirmed it had a significant effect on nervous conditions and depression. In clinical studies it was proven that sixty seven percent of depressed patients drastically improved when taking this simple herb. St. John’s Wort has an easy nature, growing in dry, gravely soils, fields, and bar ditches with no attention what so ever. The sunny yellow flowers appear on a woody base and bloom from late spring through frost. Numerous flower clusters appear at the end of the branches, each sporting five bright petals with small black dots along the margins and a single pistil in the center. The leaves have spots on them which appear to be holes. However, they are translucent ’pockets’ of resin that are released when pressed and the flowers exude a crimson liquid when cut. Early Christians named it to honor St. John the Baptist and so besides medicinal uses, St John’s Wort has mystical connections. It was said to offer protection against the devil if woven into a wreath placed upon the door and it was carried by travelers to assure their safety. During witch trials, it was stuffed into the mouth of the accused to force a confession. (Considering it was a sedative, one can only imagine what they confessed.) A sprig placed under the pillow upon retiring was said to keep one safe while sleeping and perhaps St. John himself might appear in a dream.


The tops of the plant were also considered effective for keeping away ill fortune and bringing luck. Bringing flowers of St. John’s wort into the house on a midsummer eve would protect one from the evil eye, witches, or fire. In one case in 1696, an evil spirit was terrifying occupants of a home in London until St. John’s Wort placed under pillows exorcised the apparition.


This cheery plant spreads rapidly by means of runners so I recommend putting it into a pot to contain it... it is indeed another miracle plant.
Posted by Catherine Dougherty at 7:44 AM