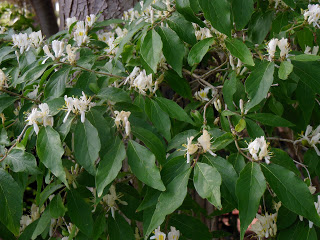 The lovely Honeysuckle arrives early each Spring. Although she is just beginning to leaf-bud, soon there will be flowers to fill the early air with their sweet scent . They are white, yellow, and sometimes red, but all are in tiny clusters that travel along the woody branches.


The Honeysuckle family is large, consisting of over 180 species, originating in both the Orient and the Americas. The Japanese and Korean Honeysuckle are a vine that is extremely hardy, will endure severe pruning and enjoys a trellis for support. In cold climates it will die back over the winter, but once out of dormancy may grow thirty feet in a year. Brought to New York in 1806 as a food source for wildlife, it was soon noted it was equally efficient at preventing land erosion, where its vigorous growing habit soon labeled it as invasive.


The American Honeysuckle may appear as either a vine or shrub, with heirloom varieties reaching tree-like proportions with a height and spread of over ten feet. Besides bringing early spring blooms to the garden, Honeysuckle has been traditionally important in both medicine and lore. For centuries the Chinese used honeysuckle for snake bites, to help remove poisons, reduce swelling, and promote healing. In Middle Ages European monks used Honeysuckle to cleanse a wound and reduce inflammation. The woody stems were pounded and eaten for arthritis, mumps, hepatitis, respiratory infections and dysentery. The delicate flowers were used to cure skin diseases, tumors, rashes and sores until the early 1900’s and the advent of ‘modern medicine’.


According to lore, it is said that bringing the blooms of Honeysuckle into the house will mean a wedding within year. In superstitious Scotland, at one time Honeysuckle vines were hung on barns to prevent cattle from being bewitched. And in the language of flowers, Honeysuckle is the symbol of love and fidelity with the fragrance said to induce dreams of passion should a bouquet be placed beside the bed.


The name Honeysuckle comes from the drop of sweet honey-like nectar that is within each flower. As a child, I spent many hours under my grandmother’s Honeysuckle gently pulling the center stamens to allow the drop of nectar to appear. The offspring of her heirloom Honeysuckle appear in my garden and those of my children. With its tree-like proportions the early humming birds feast and nest as the bees buzz about... and the sweet nectar tastes like spring!

Transplanted from my grandmother's 1935 landscape... she was resting beneath her Mother, a six inch baby, just waiting for me. 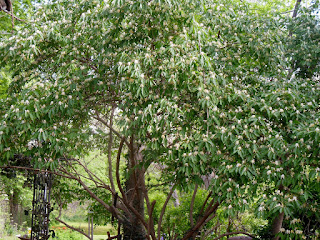 Posted by Catherine Dougherty at 8:20 AM