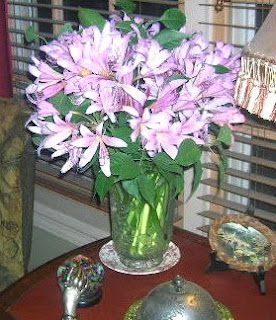 Has anyone noticed the rain managed to beat the garden to death? Granted it was welcome, but does it have to have a velocity that pounds the good soil to well below the blow sand? The trusty hoe and garden tiller are the best tools of the trade for this week as it will take quite an effort to invigorate the flattened and hardened crust left behind by last week’s rain.

The lovely Amaryllis Belladonna has made her arrival at the garden party this week. Commonly called ‘Naked Ladies they appear from a leafless base and are also called ‘Surprise Flowers’ for their overnight appearance in the garden from a barren spot. The stunning Naked Lady comes from a clump forming bulb. Each year the bulb will increase in size and the flowers will appear at the outermost edge so over the years one bulb becomes a mass of exquisite flowers.

The foliage appears in the garden in the very early spring and looks at first like jonquil leaves. Very soon however the foliage out-grows everything around it and begins to collapse early in the season requiring binding or staking to keep it from overshadowing its neighbors. The foliage dies away and is easily removed as debris by late May. The spot in the garden now appears quite bare until mid-July when suddenly the flowers begin to appear.

A tall sturdy stem supports a mass of with six to twelve flowers which have a heady and intoxicating fragrance. This wonderful plant seems undisturbed by severe growing conditions and will bloom faithfully in shade or sun regardless of the heat. The ease of these ‘Ladies’ growing habits makes even a novice gardener joyful and will add beauty and grace to any garden setting. Often planted with Shasta daisies to cover the bare base, they bloom at the same time allowing for a visual garden bouquet.

As with so many of our lovely flowers this one is originally from South America where it grows in wild abandon in dry and dusty sites.

Mine arrived in my garden quite by accident. When my father died in July of 1994. I was distraught and could not be comforted. I was walking in my garden the day after his funeral when miraculously before my eyes was the most beautiful flower I had ever seen. It was the first of 12 Naked Ladies to arrive, one each day for 12 days, each in an odd place in my garden. Since no one planted them my family has long been convinced my father sent them to me. These flowers will always seem special to me and each time I see them I think of my father and thank him for sending them to me.
Posted by Catherine Dougherty at 11:21 AM