Thoughts on Death and Dying 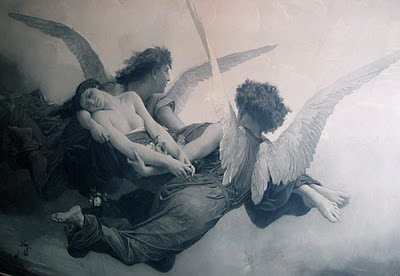 Thoughts on Death and Dying

I was very ill as a young girl and died at one point when I was twelve. As I died, I was lifted, floating upwards. I saw my bed with my body in it as small as a match box, my parents on either side of it weeping. I felt no pain and there was a lightness about me as I went higher and higher until I was called back by my parents. Suddenly, I was back in my body to fulfill my life’s destiny.

Michael had undiagnosed peritonitis years ago when our children were young. Surgery had been delayed and his chances of survival were less than 2%. As he lay there, hearing all that was said in his conscious/unconscious presence, he felt no pain but could hear his moans. He knew that passing over would be such a small step. He could hear my voice asking him not to leave and in the darkness of the second night I saw a shimmering blue/white light appear and slowly travel up his body. It was the holy light of healing so he was able to come back and fulfill his life’s destiny.

A few years ago I attended a 49, the Cheyenne ceremonies honoring the living warriors who returned from battle. As the evening deepened and the drum beat mesmerized, I had a trance-like vision and my astral body traveled beyond the building, beyond the forest, the mountains, the sky and further still into the universe. Along the path, I heard the drum beat, which echoed my heartbeat, which echoed the heartbeat of all of it... a continuum which connects all things. I saw it all with awe and when I came back I felt peace, perfect peace, for three days. I have never felt such an emotion as I did then.

I have not been afraid to die since that time for I know that the energy that is “us” unites with the universal energy of the whole. It is so far beyond earthly imagination of a heaven with golden streets or unification with loved ones. None of those human emotions are necessary... for uniting with the whole of everything is beyond earthly comprehension.

Point being: Death is not some awful unknown to be feared, it is part of the journey… and it is such a small step over.
Posted by Catherine Dougherty at 9:33 AM