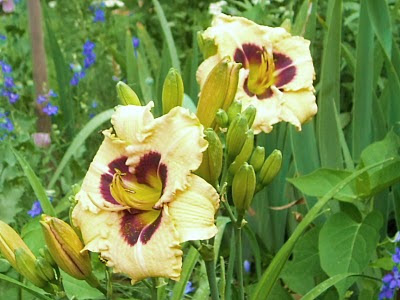 The fourth in Oklahoma was most unusual by being a total wash-out this year. The rain was unexpected and we may thank Hurricane Alex for our good fortune. For in spite of disappointing campers and flooding some areas, receiving rain and cool temperatures for the beginning of July is truly a blessing! Our poor neighbors in the North East are ill prepared for the heat dome that usually arrives here after the wheat harvest, and it seems determined to punish Yankees who never thought they would need air conditioning.

The day lilies are in full bloom now. It has traveled on a long journey from the standard orange as hybridization has ushered in countless varieties that thrill the collector. A hardy plant, the daylily is an ancient flower first found growing wild in forests, swamps, meadows and mountains throughout China, Mongolia, Northern India, Japan and Korea. It was in early China that daylilies were taken from the wild and planted in gardens as they were thought to be uplifting to the spirit. And it is the Chinese who thought the buds to be nutritious while the roots were used as painkillers and diuretics.

The botanical name of the bloomer, Hemerocallis, is based on the Greek words for "beauty" and "day" for each flower opens and lasts a single day. References to daylilies first appeared in Europe and the Mediterranean in the 1500s and the Swedish naturalist Carl Linnaeus gave the daylily its generic name in 1753.

As Daylilies arrived in United States in the early 1900s they were greeted with great enthusiasm and in the 1920s, Dr. A.B. Stout, a botanist from Wisconsin, began extensive hybrid programs and has been called ‘The Father of Modern Daylilies’. In 1946, the American Hemerocallis Society was founded and in 1955, the organization became the official registry for all types of daylilies. There is such interest and excitement amongst Daylily lovers that there are over 330 American Hemerocallis Society Display Gardens throughout the United States and parts of Canada.

Some varieties of daylily are unusual for their shapes. The crispate form has pinched or folded tips on half of the petals. The cascade form has petals that bend low and outward, as if cascading down the flower stem. The spatulate form has petals that widen toward the edges. Some daylilies have straight or smooth edges on their petals, while others have ruffled petals or jagged edges. A picotee edge is ruffled and colored to match the eye on the petals. Ruffling occurs when the petals appear to have crimped edges.

When the children were little we played an evening game of snapping off the days spent flower… which issued a rather loud pop as it was broken from the stem. By removing the spent flower, longer blooming was encouraged and the flower of the next morning appeared on a tidy stem. Regardless of the shape or color, a variety of Daylilies are perfect guests arriving at the garden party during the height of Summer. 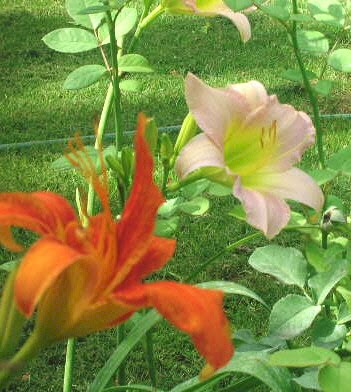 Posted by Catherine Dougherty at 8:49 AM