What does one do when the organic garden is suddenly over run with vicious pests? Almost over night, the garden was inundated with grasshoppers. The hatching's were pale green with a baby look that appeared almost cute but a week later they were adolescents changing into brown. The following week they were rough scaled and fully armed adult eating machines… with a canny intuition and wings. How can a grasshopper instinctually move from one side of a stem to another, hiding from capture? With their famous chewing mouth parts, the ability to ’spit tobacco’ and their thorny back legs they seem a product of a sci-fi horror film. Not to mention their inclusion in the Bible as the eighth plague on Egypt before the Exodus. 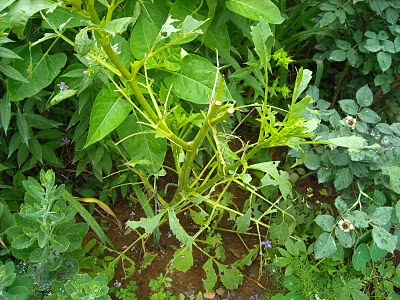 As one walks through the garden they may be heard unseen and rustling, then wing whishing and plopping from one plant to another. They have fully decimated my lovely dinner plate Dahlia, stripping the leaves with plague-like precision, even eating parts of the flower and half of the buds. The final straw was ruining my lovely Stargazer. What to do, particularly since the butterflies are spectacular, the dragonflies a delight, the bee population has recovered, and the lazy drone of the Cicadas soothes? To use pesticide on the hoards of invading grasshoppers would kill all of the beneficial and aesthetic insects, leaving me with a silent albeit lovely garden. 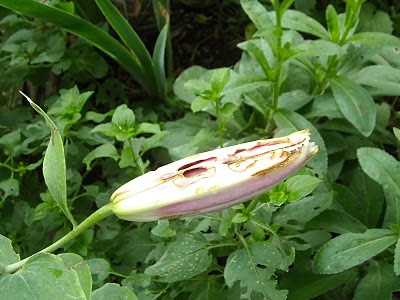 Fortunately there is a time honored and efficient answer to the problem which does not involve any spraying, dusting or trapping. Simply purchase a few Guinea Fowl! Since grasshoppers are their favorite delicacy, they will move quietly through the garden eating along the way. They do not favor flowers or vegetables making them far more desirable than chickens, who will scratch and stomp them to death. However there are a few important rules involved in owning Guinea Fowl. 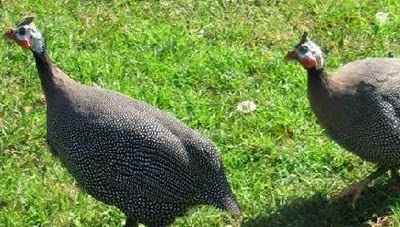 The guys purchased five adults on Father’s Day for Michael and we isolated them in an outdoor pen for a little over a week so they would acclimate and not disappear into the woods. Then we allowed two out on the first day, three the second day, and finally all five are patrolling the gardens. They put themselves to bed in their original cage each evening and we close the door behind them until morning to protect our little army. Guinea's are like soldiers of the finest magnitude or perhaps even a close knit tribe. One member will sit atop a post or find a vantage point in a tree to scout for danger. If anything out of the ordinary appears to be approaching, the sentry will sound the alarm with a high pitched rattle of screeches to warn the others who will immediately join in the screeching whilst running in circles… one could safely say Guinea fowl are ’freakers’. If the danger seems imminent, they will join forces and attack emass, flying and diving on the suspect.

I experienced this first hand a few years back as I attempted to collect 18 babies who had quietly hatched in the meadow. Following behind their mother, they at first appeared to be tiny leaves blowing in the grasses. I attempted to collect them before the cat did and their mother sounded the alarm. The ear-splitting screeching, the rush of the tribe to assist her, the flogging and diving on my head was frightening indeed so I allowed the group to keep the babies. Not the sharpest tools in the shed, they circled the babies and then lost, stomped, or simply forgot all but three of the youngsters.

Notwithstanding their terrible parenting skills, they are a marvelous addition to the garden with their distinctive sound and exotic appearance. And their ferocious appetite is fantastic!
Posted by Catherine Dougherty at 11:19 AM