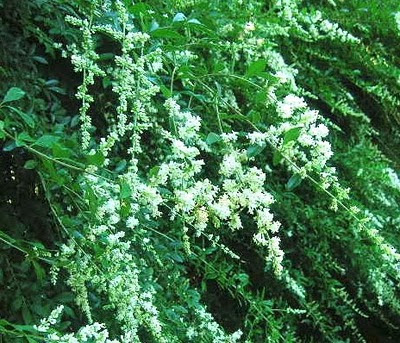 Sometimes Nature takes an unexpected turn and so it happened here. In Emerson's essay on Compensation he speaks of the 'sunny flower garden, with no room for its roots and too much sunshine for its head, by the falling of the walls and neglect of the gardener assumes new character'. He suggests that often a miraculous transformation may occur and thus it has happened in our garden.

Almost thirty years ago I planted small privet hedges found nestled beneath their parents at my Grandmother's home. Each the size of a slim pencil back then, they grew and thrived. For well over two decades, our Privet hedges were trimmed, sculpted, and modeled to perfection. They became the perimeters of carefully proportioned outdoor rooms, each defined by a circumference of hedge. The swimming pool area, the badmitton court, and even the basketball court were carefully embraced into utter seclusion by the perfectly manicured hedges. 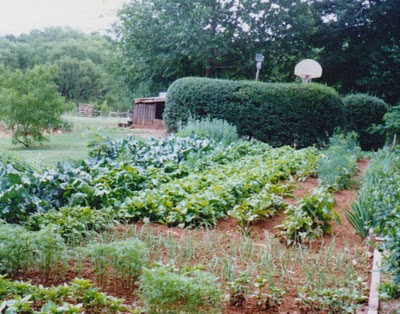 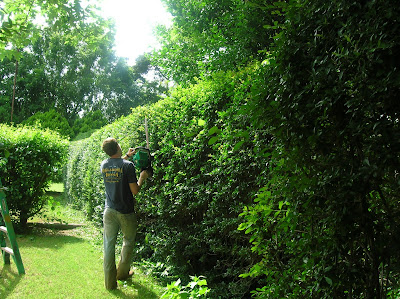 Over the course of the years, as each of our children reached a certain age, they were assigned to trim and did so proficiently. As each grew up and beyond their duty, they were allowed to escape the effort of clipping. And still the hedges grew. As the last son left home and the hedges were left to us alone, they began to reach higher and higher still, instinctively knowing that being left alone with us would finally allow freedom. They grew seeking the sunlight beyond the tree tops, with first their depth and breadth doubling then tripling. In what seemed a twinkling, they were beyond our grasp. They reached past the trimmers, further than the scope of the ladder, beyond all control.

We lamented the passing of the orderly rows of hedge and then something wonderful happened. The hedges devolved into their true nature of being. They are thick and healthy, lush and verdant, and an absolutely stunning specimen of magnificent proportions. Covered with miniature spears of tiny white flowers of the most delicate nature, they are beauty beyond compare and seem as though waiting for the wedding party. Their fragrance reaches the perimeters of the lawn, and wafts sweetly through to the woodland and beyond.

Were it not for our age and limitations, our Privet would have remained as they were…formal and yet formidable. Controlled and in the effort required to keep them perfect, controlling beyond measure. However as the garden and the gardener alike mature, some unexpected loveliness may appear… to your surprise and sheer delight. 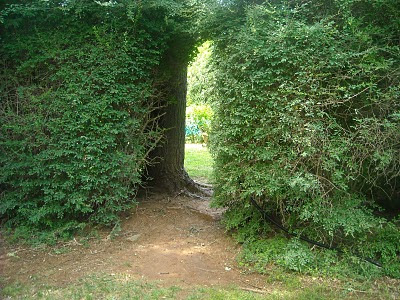 Entrance to the Secret Garden...the Frog Pond and Zen Pool Lay Beyond~
Posted by Catherine Dougherty at 7:35 AM