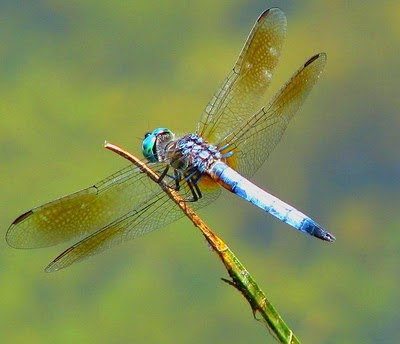 This is indeed the year of the dragonfly! They seem to be everywhere and at all hours of the day. Twenty years ago they appeared in great numbers in late afternoon, gracefully hovering in a suspended dance above the meadow. This year they appear in mass by mid-morning and in a stunning array of brilliant colors. Dragonflies are located worldwide and have more than 5,000 described species, 450 of which reside in North America, with Texas alone home to 225 species. Considerably downsized now, a fossilized dragonfly from 250 million years ago had a wingspan of 28 inches!

Dragonfly adults are lovely and graceful, with a sweet head that turns to look at you quizzically with magical eyes. Often brightly colored they have two pair of long, slender, transparent, and highly veined wings. The wings do not fold but are held permanently outstretched even when at rest. Adult dragonflies are usually found near water with a territory which may range several miles. Many males are intensely protective, defending their domain from other males, which may explain sudden aeronautical chases exhibiting extraordinary maneuverability.

A truly beneficial insect from infancy to maturity, dragonflies eat mosquitoes. The immature dragonfly is called a nymphs (or naiads). Nymphs are entirely aquatic and are found on submerged vegetation and the bottom of ponds and marshes where they capture and eat mosquito larvae. The adults seen above the meadows are capturing adult mosquitoes while in flight.

As with all interesting insects, there are many folk tales surrounding the dragonfly. Perhaps due to their unusual and multifaceted eyes, in Norway and Sweden they were said to be sinister works of the Devil. Conversely the Pueblo tribes have endowed them with significant importance. They are said to represent swiftness and activity and to the Navajo pure water. Dragonflies are a common motif in Zuni pottery, Hopi rock art and they appear on many Pueblo necklaces. In Japan they are a symbol of late summer and early autumn and also represent courage, strength, and happiness. They often appear in art, literature, and on Japanese pottery.

Regardless of their artistic and intrinsic importance, the fact they will purge the garden of mosquitoes makes them an extremely welcome visitor anytime. 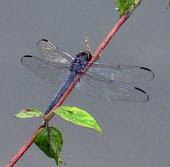 *My friend Sharon Lee, an awesome photographer, graciously allowed me to use her photo of the dragonfly.
Posted by Catherine Dougherty at 1:52 PM