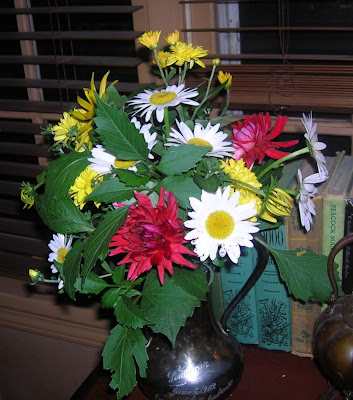 This year it seems we will not have much of a foliage show as the stressed trees have prematurely cast their dried and wilted leaves before they changed. This is a survival tactic and even the mighty Oak and Walnuts have cast off their fledgling youngsters before they reached fruition. Many of us lost the watering battle and said goodbye to cherished trees and shrubs, many of which were old friends. As the hours of sunlight decrease many are breathing a sight of relief… very glad it is almost over.

However to the utter delight of the gardener, the flower show is not over yet… the dazzling Dahlia is finally producing a fabulous show. Among the most stunning flowers available, her ability to tolerate summer heat is a testament to her Mexican origin since hot and dry is her favorite climate condition. To honor her tenacity and beauty, the Dahlia has been the National Flower of Mexico since 1963.

The first dahlia tubers were discovered by invading Conquistadors in the 1500’s, who erroneously thought the tubers to be potatoes…. until of course they sprouted and bloomed on the voyage home. Following their first introduction to Court, many unsuccessful attempts were undertaken to obtain and cultivate the Dahlia and from 1660 though 1751 all efforts were unsuccessful. However viable seeds sent from a botanical garden in Mexico reached Madrid in 1791 and the first flowering dahlias began to appear in Spain. The following year seeds were sent to England but were lost, as were those sent to the Netherlands in 1804. After much effort, cultivation was finally assured in 1813 and the results are the ancestors of the astounding flowers we see today.

The bulbs, all of which will have reproduced nicely over the season, must be dug before a freeze. Dry and store them and over the winter, then plant once the ground has thawed. The Dahlia is well worth the effort!

Posted by Catherine Dougherty at 11:14 AM