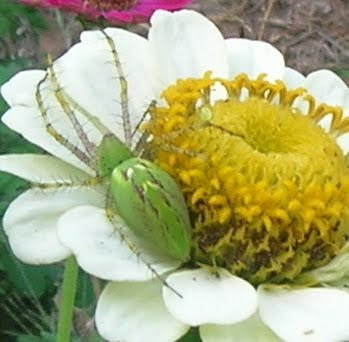 With the advent of fall, one notices the influx of spiders lurking about the garden, the rafters of the house and every available nook. They are a most interesting invertebrate in both appearance and habit. All are predators which make them valuable to the gardener as they will eat flies, mosquitoes, grasshoppers, locusts, cockroaches, and aphids. The habits differ among species with some making intricate webs to trap their prey while some lie in wait on flowers and some simply travel about on the ground. Now is the time to see the intricate web of the amazing Orb Weaver whose wonderful web will catch almost any flying insect. Particularly interesting is the way in which she will repair the web, giving it an almost stitch-like appearance. 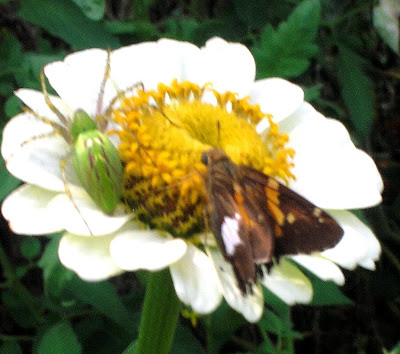 I spent the month of September watching my lovely Lynx spider live on the Zinnias. She occasionally moved from one flower to another making it impossible to pick a bouquet lest I disturb her in her chosen 'territory'. As a true fan of Charlotte's Web, I was curious about what would ensue if she was left to her own devices. Would she have babies?

Yes, indeed, she did. A little over two weeks ago she began looking a little less plump and upon careful examination, I noted she had an egg sac on the underside of the Zinnia. It was translucent white and had a shimmering look to it. My 'Charlotte' stood guard vigilantly and never again made any efforts to catch a butterfly for dinner. She began to weave a straggled web around the top of the flower extending over eight inches to include a portion of the stem. Last Thursday, the babies began to hatch. 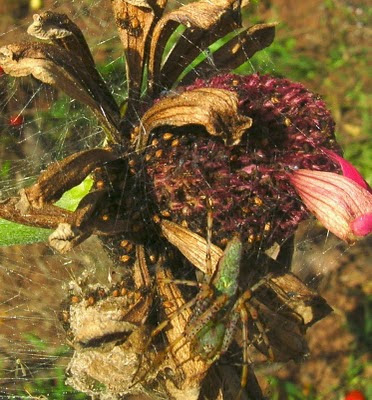 They are orange, the size of a pin head with tiny brown legs. Over the course of three days they slowly emerged and by Sunday the sac was empty. As the Mother stood guard, and the web became a play-pen, the little spiders all gathered on the top of the fading Zinnia. As the temperature climbed, they scattered about and began to explore only to rush together in a cluster if I jiggled the flower. 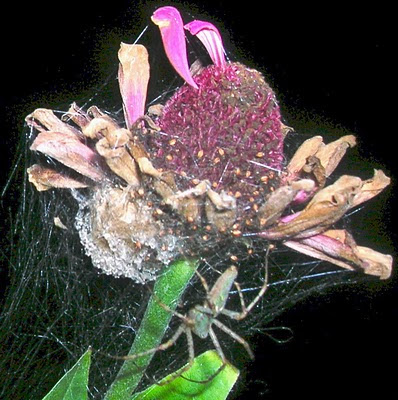 The Mother Lynx is clearly fading. She is such a shell of her former self that it is apparent her days are numbered and she will not survive. As I began research on my spider, concerned about the babies, it said it takes another two weeks until fully functional spiderlings are able to care for themselves. It also said they will need to eat eight grub-like worms to reach maturity. It is obvious that many of them will not be able to grow up considering the fact it is the end of the season. For those who doubt Motherhood 'takes something out of you', please look at my poor Mother Lynx... May she RIP. 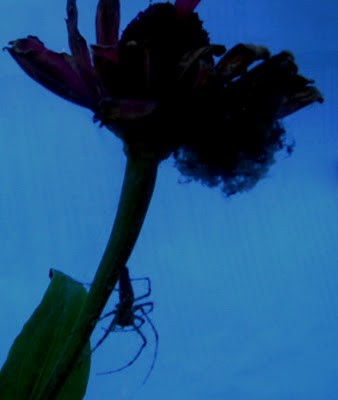 Posted by Catherine Dougherty at 11:40 AM