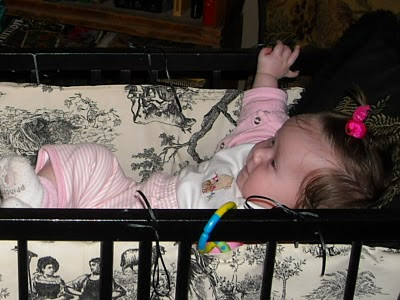 I have committed myself to babysitting my first grand baby twice a week, so I keep four month old Julia every Wednesday and Friday. After raising my eight, it seemed such a small undertaking. And I had done the full nine yards with mine… it was very serious business raising environmentally conscious, compassionate, well-rounded individuals. How hard could one baby be?

I came to my marriage to Michael with a two year old and then had our seven from 1975to 1987; our only daughter arrived last. With careful planning and cutting corners, I was able to stay at home with them, a luxury few young people today are able to have. The duties and work were rewarding yet time consuming and nothing escaped my thoughtful, yet overzealous, intent. Gardens were planted to provide home grown organic food which was consumed both fresh and home-canned. Six loaves of bread were made every other day and jellies were made from fruits in season. The cloth diapers I used were line dried… disposable diapers contain formaldehyde and who would want such a chemical touching baby skin? Plus line dried diapers absorbed vitamin D from the sunlight, which was an added boost for house-bound infants. All of my children were nursed, and since mother’s milk contains a tranquilizer, they were relaxed and happy babies. Each time we added another, I would place the baby in the middle of the fray with the only instruction, ’don’t let the baby cry’. The current baby would be passed from child to child, with no one ever feeling taxed and the little one felt incredibly loved.

Marie Winn’s groundbreaking book 'Children Without Childhood' was published in 1983, and mirrored my concerns about the loss of traditional childhood. A researcher, Ms. Winn had noted that the brain activity of monitored children went into ’sleep mode’ while watching television! Naturally my children had limited exposure… instead they were sent to the yard to play!

Enter Miss Julia! To make a long story short, I realize that Julia is my granddaughter, not my daughter, so I have no real input into her life style… she has her own parents for that. Friday morning, we worked on her vocals, (she will learn to say ‘Grandma‘), played pat-a-cake, this little piggy, and took intricate notice of her feet before feeding her a bottle and putting her down for a nap. She dozed a few minutes and woke up fussy! Really fussy… like I had to dance with her for almost four hours! As I was nearing collapse, I noted she was looking at the TV. Perhaps, perhaps… no it was so so wrong! But I was tired… dancing for hours was much harder than weeding a 60 foot flower bed!

So, I did it; I took the giant leap into the moment... which included high definition! I pulled her little bed to the television, put a pillow behind her propping her upright, turned the channel to Disney and watched as she began chortling to her animate ‘friends'. She was delighted! It’s a new world and who am I to hang onto the past? Why would I? I am now a thoroughly modern Grandma… and I shall embrace the moment! 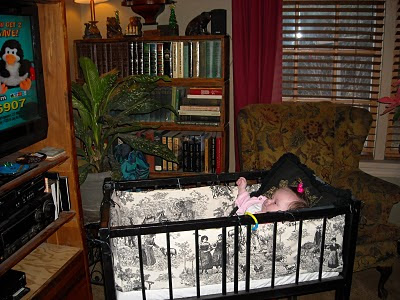 Posted by Catherine Dougherty at 9:08 AM