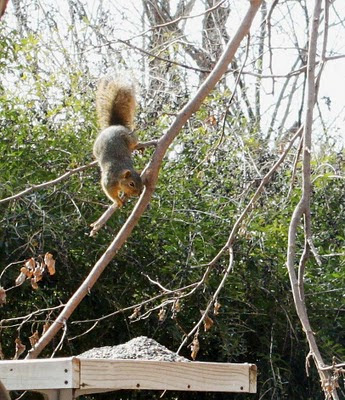 Every now and then, something totally unexpected occurs in the garden. Last summer, following a rather fierce thunderstorm accompanied by high winds, a substantial branch of the Mulberry broke, yet not completely. It remained halfway attached, stubbornly resisting all efforts to remove it, eventually becoming a rather irritating eye sore. It lost leaves and became brittle yet still remained loath to all efforts to tug it down. Someone had borrowed our ladder and our chainsaw, and most certainly we were not foolish enough to imagine climbing the tree, handsaw in hand. So there it remained, hanging lifeless adjacent to the bird feeder.

With attention diverted from the sleeping garden, the bird feeder has now become center stage. And so, as with so many serendipitous accidents, the branch has become the accidental welcome mat to the feeder. All the birds have found the branch a delightful perch, landing and then leaping in winged flurry to the dinner table. Over the weekend, Mr. Squirrel discovered it too. From safety of the Mulberry he first tested the branch and then, with tail-twitching caution, he slowly made his way to the feeder. By afternoon his confidence abounded and he could scurry back and forth with ease, happily sharing while enjoying the company of Goldfinches and Cardinals. So it must be noted that often what appears to disrupt tidy order, over time may afford a delightful new course in the garden. And so it is with our branch.

For winter reading, The Old Farmer’s Almanac is a source of much useful information for the gardener. (Computer savvy gardeners may view it at http://www.almanac.com/) The Almanac has been an annual publication since 1792, and for the month of January the Farmer’s Calendar discusses forecasting the weather. Now days we tend to watch or listen to weather predictions made by professionals who rely on the latest technology. In days past, people would have simply looked outside the back door, made a few observations, and noticed the ‘signs’ which indicate change and predict weather patterns. The blizzard which hit the east coast with such velocity was easily predictable if one had noticed the ring of haze circling the Moon the evening before; it was so unusual that we noted it as we looked at the sky. The directions of the wind and cloud patterns all indicated last weeks temperature plunge before the ‘artic blast’ actually arrived. It would be an interesting winter project for both children and adults to learn the folklore surrounding weather patterns and then make a game of prediction without technology. And according to the 2011 Almanac, we are advised to hang onto our hats for the next few months, for it is expected to be quite a ride!

*Remember: We are in a drought, so plan to give the garden a drink whenever we have a day which promises to remain above freezing. Even dormant trees and plants need moisture in winter to produce in the spring.
Posted by Catherine Dougherty at 8:17 AM