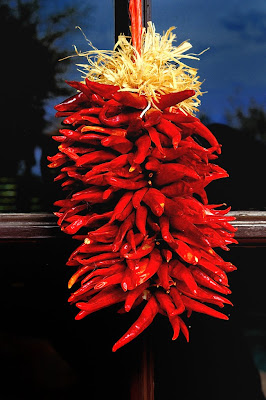 Several years ago the Journal of Science reported that the popular Chile pepper may be the oldest cultivated spice in the Americas. A 6,100 year old archaeological specimen, a bowl, was found intact. As scientists scraped the residue, they found it contained both Chile peppers and corn. In all, seven New World sites have found Chile pepper residues and also the remnants of corn. This would suggest that these two foods, still intimately paired in South American cuisine, have been used as staples since ancient times.

The study was conducted by a team of 15 scientists who found the residues in utensils in both the Amazon basin and on the coast of Ecuador. This was positive indication that cultivation occurred in coastal tropical cultures, which until now were considered primitive. The peppers were important enough to be traded across the huge mountain range to the home of the sophisticated and advanced Incas.

Additionally, the researchers believe further study may show that peppers have actually been used 1,000 years earlier than their current oldest specimen. The birthplace of agriculture has long been considered the Fertile Crescent of Mesopotamia. With this discovery the pepper will join the list of ancient spices cultivated there. The three oldest known spices are Capers which have been found at 10,000 year old sites in Iran and Iraq; Coriander found at an 8,500 year old site in Israel; and Fenugreek in Syria's Tell Aswad, which is 9,000 years old.

It is not known whether the Capers, Fenugreek, or Coriander were domesticated or wild, however it has been determined that the peppers and corn had been domesticated. To be considered domesticated, a population of plants must have their behavior, life cycle or appearance significantly altered as a result of being under the control of humans for multiple generations. Within decades of European contact, the New World plant was carried across Europe and into Africa and Asia where it was met with wild enthusiasm. Upon acceptance on these continents, it was further altered through selective breeding until today it exists in some form almost everywhere. The Chile pepper is an essential cooking ingredient in Hungary, where Paprika is a national symbol, in Ethiopia, with its signature spice Berbere, and in China, where entire cuisines are built around its heat. In our own Southwest, hanging peppers outside the kitchen is believed to bring good luck.

We have the foresight of our neighbors to our South to thank for this ancient and fabulous species of plant. They are easily grown here as our hot and dry summers are perfect for their temperment; they thrive here. If you are lacking a vegetable garden tuck one here and there among the flowers. The plants have varying degrees of heat… from mild to eye-watering so choose one that matches your tastes. Salsa anyone?