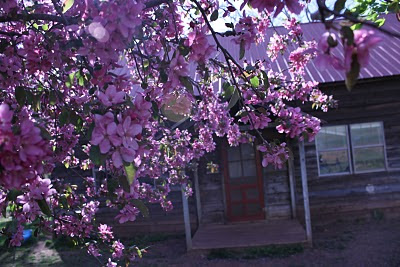 Flowering Crab in front of the cabin

Before fruit trees come out of dormacy, they probably need to be trimmed using the five ‘D' rule that applies to pruning. The D’s are dead, damaged, dying, diseased or deformed wood. Begin by removing all the water sprouts or suckers; the thin, whip-like wood that juts straight up from the main limbs but could never support any fruit. With a folding saw or running shears, cut down to the supporting branch and leave behind no trace of the sucker or its swollen base.

Then there is the possibility one needs to remove some large branches. First step back and evaluate the tree, or perhaps take pictures. One of the great things about the digital age is the fact one may take a photo and graphically “prune” out some wood before making any real cuts. With your favorite photo-editing program, crop or black-out the branches you think the tree would be better without. If the tree looks better without the branches then proceed with cutting them.

The basic idea is to open the center of the tree up from the congestion too many branches create which prevents light and air circulation. Never remove more than one third of the live wood in any year. Therefore, it will take at least three years to accomplish what you imagined when you “pruned” the expendable parts of the tree out of the snapshot.

When removing large branches, first reduce the weight of the limb by cutting off half of it. Pruning is a three-step process, to prevent tearing. The first cut is always an undercut, made no more than halfway through the branch from underneath. Next, an uppercut, from the top, just slightly farther out on the limb from the undercut, will leave a stepped-off stub.

If the limb is still very heavy and long, repeat the first two steps until you have still less weight. Then begin the final cut near the trunk, a one-step cut from above or below, depending on what angle suits the tree best. Make this just outside the branch-bark collar or ridge, which on many trees is a visibly raised spot where trunk and limb tissue meet. Never cut into the collar; but never leave a big stub, either. The tree will heal itself without wound paint if the collar is left intact. Finish with an application of dormant oil spray and look forward to a sizable harvest from you orchard. 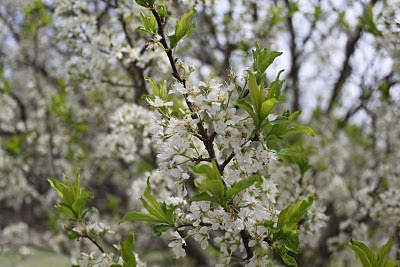 Pear Trees in Bloom
Posted by Catherine Dougherty at 4:50 AM